Samsung is taking pre-orders for a new $900 portable projector that the company is positioning as much more than a gadget for beaming movies onto your wall.

The Freestyle is a small, cylindrical device that measures about 6.8″ x 4″ x 3.7″ and weighs 1.8 pounds when used with a stand. It can project 1080p video at up to 100 inches, has a built-in 5W 360-degree speaker, and while it doesn’t have a built-in battery, it works with USB-PD power banks that support 50W/20V or higher output. You can even plug it directly into a standard E26 light socket using an adapter. 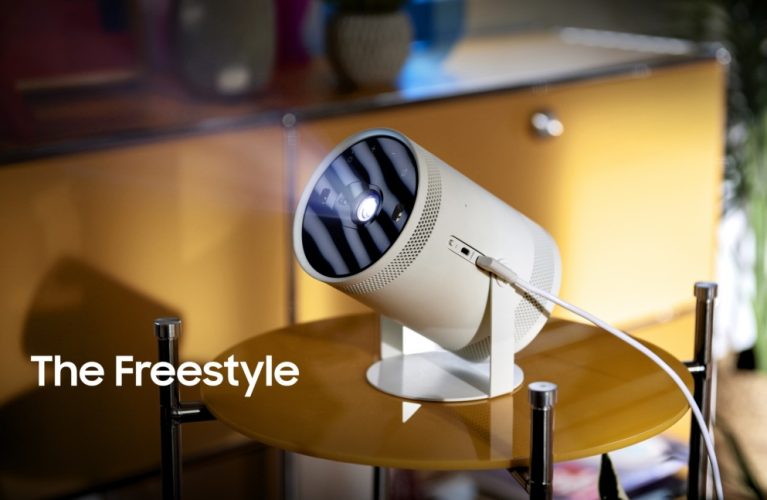 That opens up interesting new possibilities because, in addition to beaming imagery at your wall, you can shine it down onto a table to view videos or presentations, for example.

Samsung says there’s also an “ambient mode and translucent lens cap” that allows The Freestyle to “provide mood lighting” effects. And it can work as a smart speaker, streaming music directly over the internet from supported services while beaming visualizations onto a wall, floor, or ceiling thanks to an adjustable stand. 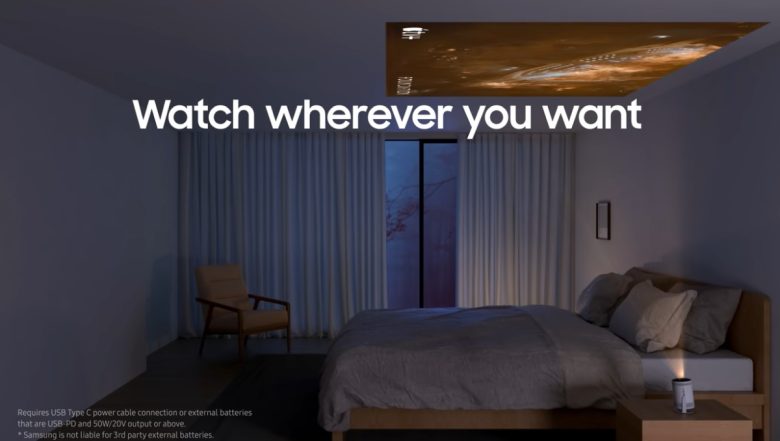 The Freestyle runs similar Smart TV software to what you’d get if you bought a recent Samsung TV, and also supports screen mirroring and casting from Android or iOS devices. You can also mirror content from The Freestyle to another Samsung Smart TV nearby, allowing two people in different rooms to watch the same thing at the same time (or for you to keep watching when you move from room to room). 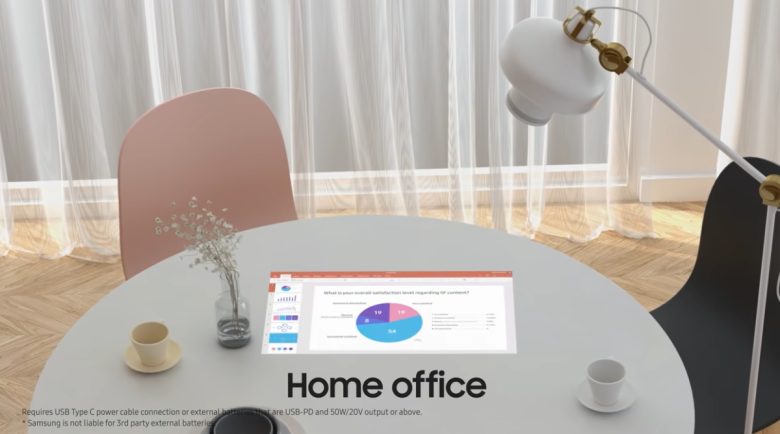 It has USB-C and micro HDMI ports, a built-in microphone for voice controls, and the projector comes with a 60W USB-C power adapter, lens cap, and a remote control with a mic key, navigation buttons, and dedicated Netflix, Amazon Prime Video, Disney+ and Samsung TV Plus buttons.

The projector will automatically align pictures if even if it’s not positioned on a perfectly flat surface, and it can calibrate colors even if it’s not shining on a perfectly white wall or screen. Image size will vary depending on location: Samsung says when positioned 2.6 feet from a surface, you’ll get a virtual 30″ screen, but if you move The Freestyle back to a distance of 8.8 feet you get a virtual 100″ big screen display. 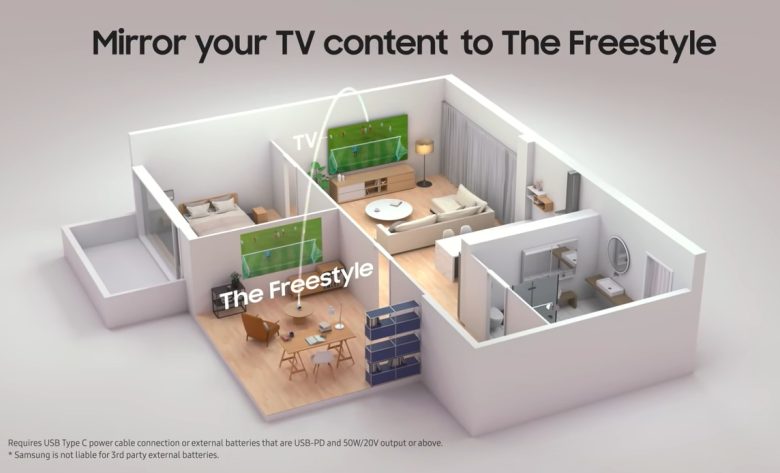 With an LED light capable of 550 lumens, it’s not the brightest projector around, so you’ll probably get best results in a fairly dim environment. But all told, the display has an interesting combination of features that helps set it apart from other portable projectors… and which might even justify the $900 asking price and the ridiculously styled name (it’s officially “The Freestyle,” not the “Freestyle”).

Other features include support for WiFi 5 and Bluetooth 5.2, a 300:1 contrast ratio, support for HDR10 content, yes, support for Samsung’s Bixby voice assistant service as well as Amazon’s Alexa service.