The Windows Subsystem for Android is an optional Windows 11 feature that allows you to run Android apps on a PC as if they were native apps. While it wasn’t ready to go when Windows 11 was released last fall, Microsoft began rolling out preview builds to members of the Windows Insider program in October 2021.

Now the company says it’ll launch a public preview in February, meaning that while the feature is still in beta, you won’t need to be running a pre-release version of Windows to run Android apps on your PC. It’s one of several Windows 11 feature updates planned for the coming month. 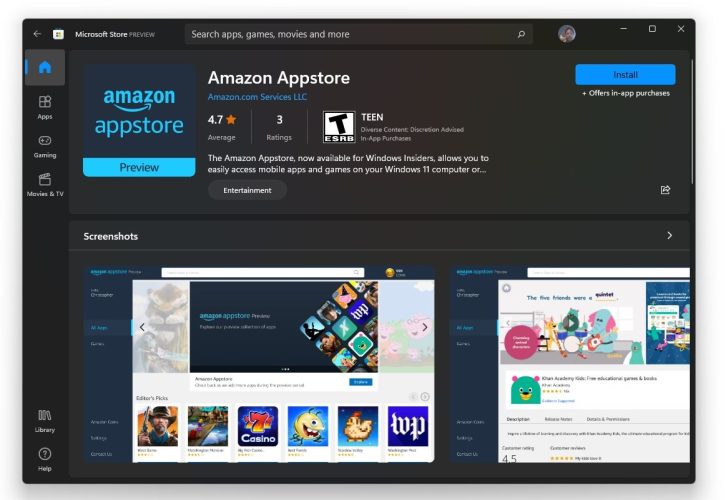 Microsoft says it’s also bringing redesigned versions of its Notepad and Media Player apps to Windows 11, plus taskbar updates with features like the ability to quickly mute or unmute calls and view weather conditions at a glance.

As for Android app support, it’s expected to work much the same way in the public preview as it has for folks running Windows 11 dev and beta channel preview builds. In a nutshell, the subsystem installs an Android 11 operating system that coexists with Windows and implements system calls that allow it to interact with Windows.

That means that once you install an Android app, it will show up in the Start Menu. You can run multiple Android and/or Windows apps at once. And when it’s running you can maximize, minimize, resize, or move the window it’s in. They also respond to Windows 11’s Snap Layouts and other features. And you can uninstall them with a right-click.

Officially the way to find Android apps that work with Windows 11 is through the Amazon Appstore, which can be downloaded and installed from the new Microsoft Store application. But there’s a limited selection of apps available for Windows in the store, and you won’t get Google apps and services like Gmail, Google Maps, or Google Play Services (which is required by many Android apps for full functionality).

But it’s relatively easy to sideload Android apps on Windows 11 after you’ve downloaded them from trusted third-party sources. You can even install the Google Play Store, although that’s a little trickier and possibly riskier, so I’d only recommend you try that if you know what you’re doing and/or are unafraid of uninstalling and reinstalling the entire Windows Subsystem for Android in the future if necessary.