UPERFECT makes a line of docks that basically turn your smartphone into a laptop computer by adding a keyboard, touchpad, portable display, and battery.

The company’s latest is the biggest, highest-resolution to date. It’s also the most expensive. The UPERFECT X Pro Lapdock features a 15.6 inch, 4K touchscreen display, a detachable keyboard, and a $650 list price, although it’s currently on sale for $550. 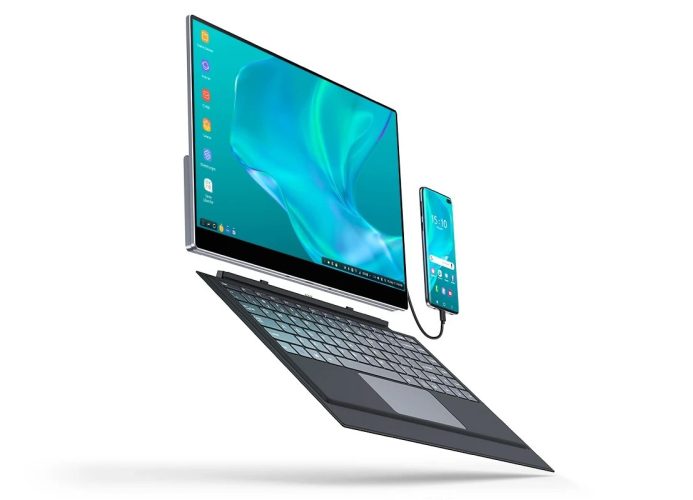 The lapdock features an IPS LCD display with support 100% sRGB color gamut and 10-point capacitive touch input. There’s a built in kickstand that allows you to use the screen as a standalone portable monitor.

It has a mini HDMI input and two USB-C ports, allowing you to connect a smartphone or other devices like single-board computers or laptops (in case you want to use the display as a second screen.

There are also stereo speakers and a built-in 10,000 mAh battery.

But what sets this lapdock apart from a typical portable monitor is that it also has a detachable magnetic keyboard, making the whole thing look more like a 2-in-1 tablet than an accessory. But unlike a typical tablet, the UPERFECT Pro X doesn’t have its own operating system, it’s basically just a display and input device for connected smartphones or other hardware.

While UPERFECT positions its lapdocks as solutions for Samsung smartphones with DeX software (which provides a desktop mode when connected to a keyboard and display), you can also use this sort of device to turn a Raspberry Pi or other single-board computer into a laptop (as long as it can run on battery power), and could be a solution for turning other Android or Linux phones (I’m looking at you PinePhone) into pseudo-laptops.

That said, for the price that UPERECT is charging for its new lapdock, you could buy an actual 2-in-1 tablet like the Microsoft Surface Go 2. You just probably wouldn’t get a model with a 15.6 inch 4K display for that price.

But it’s not like the UPERFECT X Pro is the only game in town. It’s just one of the fanciest. You can find other solutions in our roundup of laptop docks that let you use a smartphone like a notebook.