Lenovo’s ThinkBook Plus line of laptops have been around for a few years, offering an interesting, if niche look at what’s possible in the world of dual-screen notebooks.

Up until now that’s meant slapping a stylus-friendly E Ink display on the lid. But a new image leaked by Evan Blass shows something a very different kind of dual-screen notebook. 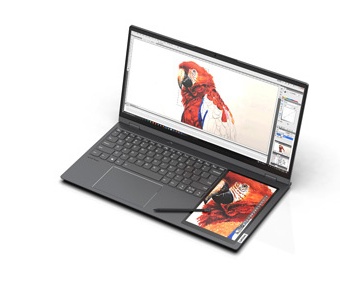 According to Blass, Lenovo is working on a ThinkBook Plus notebook with a 17 inch primary display and a smaller secondary display built into the base of the notebook, to the right of a full-sized keyboard.

There are no details about specs, pricing, release date, or even if Lenovo actually plans to launch this notebook or if it’s just a concept device at this stage. But given that Lenovo has released some oddly specific niche devices over the years, there’s no reason to think that the company wouldn’t release this 17 inch dual-screen notebook to see if it finds an audience.

The image appears to show an ultra-widescreen primary display that kind of reminds me of the Toshiba Satellite U845, and a keyboard and trackpad similar to what you’d typically find on a notebook with a 14 or 15 inch display, except positioned a little left of center to make room for a second screen on the right side of the base, which is positioned in portrait orientation.

That second screen appear to be a full-color display with support for digital pen input, which would allow artists or graphic designers to work on the lower display without obscuring the larger primary display with a pen. It could also come in handy for folks who prefer taking handwritten notes rather than using a keyboard or who want to be able to quickly and easily annotate text by writing in the margins or highlighting contents of PDF files or other documents. But primarily this seems like a notebook designed for artists and graphic design professionals.

Unlike the first and second-gen ThinkBook Plus laptops, it doesn’t appear that the 17 inch model is designed for use in tablet mode, unless there’s a third screen hidden on the back of the lid, which we cannot see from the single image posted by Evan Blass over the weekend.

Have you guys seen this yet? 17-inch ThinkBook Plus from Lenovo… pic.twitter.com/OElc5ZM3pb