Apple’s new MacBook Pro 14 and 16 are some of the most powerful laptops available, thanks to the new M1 Pro and M1 Max processors. But they also have a controversial design – while Apple shrunk the display bezels for its latest MacBook Pro laptops, the company also introduced a camera notch.

Not only does this introduce an obstruction to the top of the display, but it can also cause some applications not to function properly. So Apple has revealed a solution: you can effectively disable the notch by introducing a virtual bezel.

A new Apple Support document explains how to configures apps (on a per-app basis) to “appear below the camera area” on the latest MacBook Pro laptops:

Now when you run that application, a set of virtual black bars will appear at the top of the display to the left and right of the camera notch, allowing the top of the app to stop below the camera instead of surrounding the notch.

This means menus and other items won’t be covered by the notch. 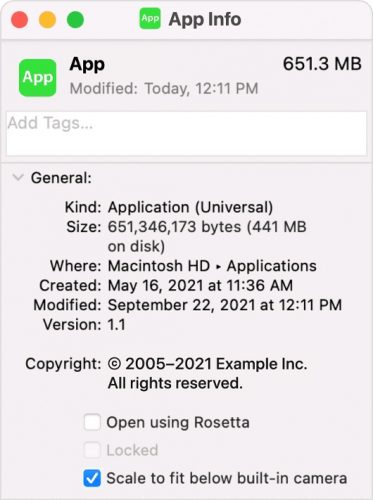 Why do we need this workaround? Because Apple doesn’t seem to have another way to deal with apps with a lot of menus, some of which would otherwise be hidden behind the notch.

Under normal conditions, if you slide a mouse cursor across the top of the screen, it will continue sliding invisibly when it hits the notch until it comes out on the other side. That’s a good thing if you don’t want the cursor behaving in unexpected ways when you move it across the screen. But it can be a problem for applications that have interactive elements that would normally show up exactly where that notch is.

Quinn Nelson of Snazzy Labs recently demonstrated the issue with some applications featuring invisible menu items, while other apps seem to circumvent this by not allowing you to click in the notch at all… but with the side effect that there’s not enough room for all status notifications, so some of them just disappear.

So the good news is that it looks like Apple does offer a workaround, which seems to work as promised, according to a brief demo posted by Joseph Angelo Todaro:

Good news for notch haters! If you’ve got an app (or apps) with menus that collide with the notch, just Get Info on the app, and enable “Scale to fit below built-in camera”.

While the app is running (even in the bg), your display is scaled.#Apple #M1Pro #M1Max #MacBookPro2021 pic.twitter.com/nlGqkFkXAH

But the bad news is that not only does this setting add black bars to the top of the screen, but it also adds them to the left and right sides, further reducing your effective screen real estate.

So we’re left to wonder, not for the first time, why Apple didn’t just include a slightly thicker top bezel or follow the lead of companies like Asus and Lenovo that have been using reverse notch-style displays on some notebooks for the past few years, combining slim top bezels with small bump-outs above the display to make room for a camera section.

For now, it looks like it will be up to app developers to ensure their apps are compatible with Apple’s new displays, notch and all. The company notes that after an app developer updates their software to work with the new screens, the “scale to fit below built-in camera” option will no longer appear in the App Info for that specific app.