The Windows Subsystem for Linux has been allowing users to run Linux applications on Windows PCs since 2016, but for most of that time you’ve had to jump through some hoops to enable the feature.

Now you can just download and install Windows Subsystem for Linux from the Microsoft Store… assuming you’re running Windows 11. 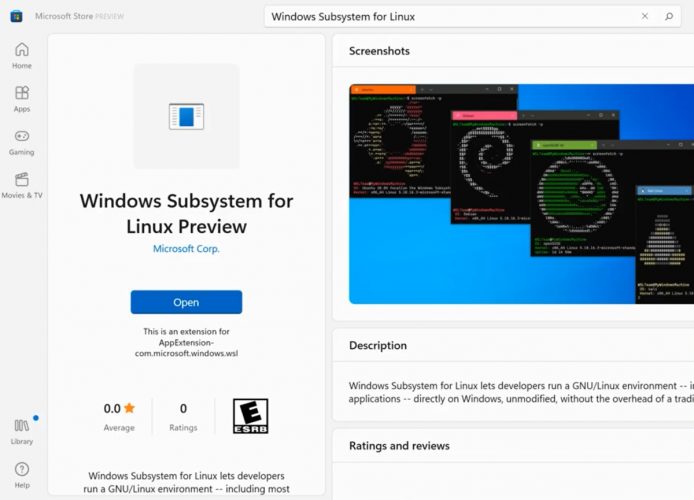 Not only does that make installation a little easier, but it also means that Microsoft can push new features, bug fixes, and other updates through the Microsoft Store, which could allow you to get them faster, since you don’t need to wait for a Windows Update to be released.

You may still need to enable the Virtual Machine Platform from the optional Windows components if you haven’t already done that. You can either do that by checking the box in the Windows Features menu, or by running this command as an admin in PowerShell:

Windows Subsystem for Linux in the Microsoft Store is launching initially as a preview, so there’s a chance there could still be some bugs to work out before the training wheels come off. But the software does already support many recent additions to the WSL platform including:

Users who have already installed WSL don’t have to nuke anything in order to install WSL through the Microsoft Store: if you opt to use the new method, it will install a new version of WSL that can coexist with your current setup, allowing you to keep any Linux distributions and settings already on your computer. But the Store version will be the primary one that you’ll interact with moving forward unless you uninstall the Store version of the WSL app.

Alternately, if you’re happy with the version of WSL that’s baked into the operating system, there’s no need to move to the Microsoft Store version. The company says it will continue to support “the inbox version of WSL”in Windows 11.

for most of that time you’ve had to jump through some hoops to enable the feature and you were limited to running command line-only software unless you jumped through even more hoops.