Most Android devices come with at least a few basic apps pre-installed. Some come with a lot of apps that you may not want or need. And while this isn’t something that’s unique to Android device, the bloatware that often comes with Windows PCs can usually be uninstalled. Android bloatware is a tougher nut to crack, because it’s often written to your device’s system partition, which means it cannot be fully removed without root access.

But you can prevent unwanted apps from ever running or consuming precious CPU or RAM resources. It’s possible to do that with a series of Android Debug Bridge commands. Or you can simplify things by using a free utility called Universal Android Debloater. 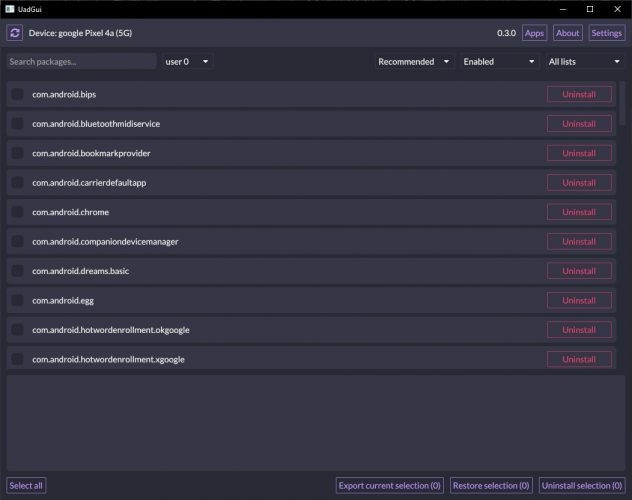 In a nutshell, this application disables pre-installed system apps from the user-accessible data partition of your Android phone, tablet, or other device. While the disabled apps will still take up space in your system storage, the Universal Android Debloater script will stop them from ever being loaded into memory – even after you reboot your device.

The new Universal Android Debloater GUI utility is now available for Windows, Mac and Linux computers and supports uninstalling/disabling Android apps as well as restoring/enabling them. There’s support for devices with multiple users. And the user interface lets you quickly shift between seeing all apps on your device or smaller lists labeled “recommended,” “advanced,” “expert,” “unsafe,” and “unlisted.” 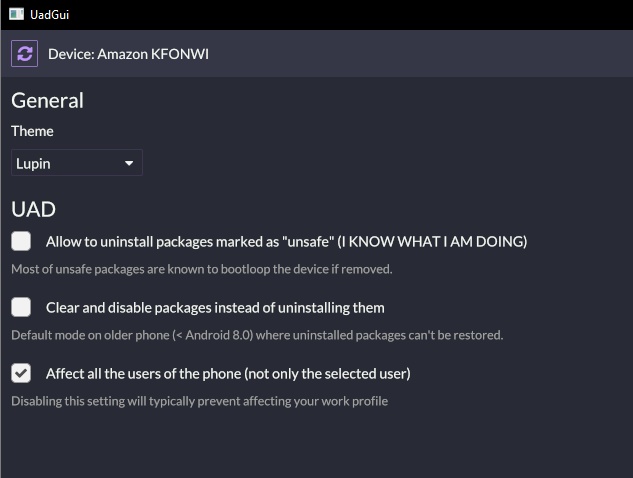 In case the names weren’t a giveaway, the ability to disable any app on your Android device comes with some risks. You might end up with a device that doesn’t perform properly. Delete the launcher app without installing a replacement, for example, and your phone or tablet might not be usable at all. So proceed with caution.

You’ll also want to know what the full strings are for the app you want to disable. Some are obvious. For example. com.android.chrome is Google Chrome. But did you know that com.android.bips is the Android built-in print service? I didn’t until I looked it up.

In the event that you do accidentally end up removing apps that you want to keep, the process is reversible – one of the software’s features is reinstallation of system packages. But you may lose any user data associated with those apps, so it’s probably a good idea to back up as much data as you can before beginning.

You can find more information about the Universal Android Debloater, as well as installation instructions and download links for the latest release, at the open source project’s GitHub page.

Note that the Windows instructions suggest downloading Google’s Android Platform tools, unzipping the folder, and then adding it to your computer’s PATH. But you can also just put the uad_gui-windows.exe executable file in the same folder as the platform tools and double-click the app to run it.

Another thing I noticed is that while I was able to use the UAD GUI utility with my Google Pixel 4a 5G smartphone, when I tried connecting it to my Amazon Fire HD 8 (2020) tablet it was able to detect installed apps, but would not allow me to uninstall/disable any of them. So for now it’s still easier to do that by command line or with the aid of a different GUI utility called Fire Toolbox.