After months of developers previews and beta tests, Google Android 12 is ready to go… sort of. Google is now pushing the source code for Android 12 to the Android Open Source Project (AOSP), which means we’ll likely start to see phone makers and custom ROM builders update to Android 12 soon.

But if you have a Google Pixel smartphone you’ll still have to wait a little while for an Android 12 over-the-air-update to arrive. Google says it’ll start rolling out for Pixel devices “in the next few weeks.” 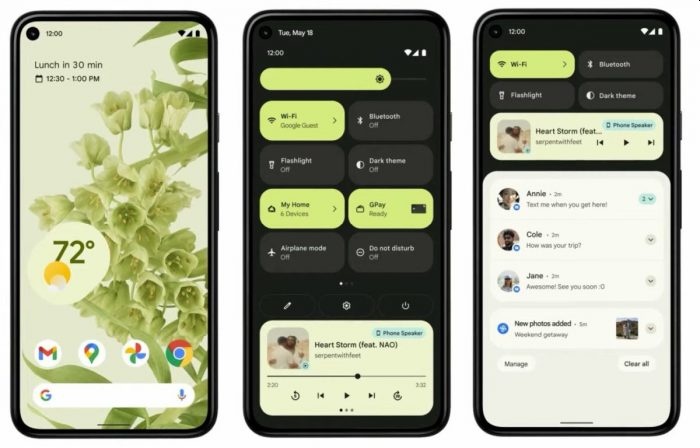 Android 12 updates will be available for the Pixel 3 and later, and odds are that when the Pixel 6 goes on sale it’ll have the latest version of Google’s mobile operating system pre-installed.

The company says Android 12 should arrive later this year for recent phones from Samsung, OnePlus, Oppo, Realme, Tecno, Vivo, and Xiaomi, among others.

Among other things, Android 12 brings a brand new “Material You” design language, which is the biggest visual change Android has seen in years, an updated user interface for notifications, and performance improvements: Google says it’s reduced the amount of CPU time used by core system services by 22% and improved app startup times.

There’s also a new Privacy Dashboard in the Settings app that gives you more information about which apps are using location, mic, and camera data, as well as new indicators in the status bar to let you know when the mic and camera are actively being used.

You can find more information about Android 12 in the release announcement at the Android Developers blog. The folks at xda-developers have also put together a pretty good overview of new features in Android 12.