Google’s newest Pixel phones are the company’s most powerful to date, the first to feature Google’s own Tensor processors, the first to pack a completely upgraded camera system, and guaranteed security updates for at least five years.

The Google Pixel 6 and Pixel 6 Pro are smartphones with flagship-class hardware and surprisingly affordable starting prices. They’re up for pre-order for $599 and $899, respectively, making the new phones several hundred dollars cheaper than the latest flagships from Apple, Samsung, and others. 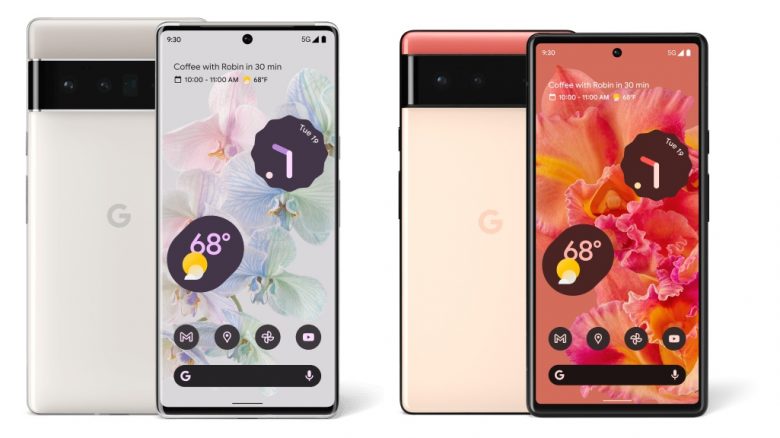 The Pixel 6 and Pixel 6 Pro might be among the most leaked smartphones ever, so there aren’t many surprises in Google’s official announcement. But the company has confirmed its aggressive starting prices, explained the features of its Tensor processors, and acknowledged that part of what allows the company to promise five years of software updates is that Google now controls the processor.

The company also notes that designing a custom processor has also allowed Google to add support for previously-unavailable features. For example, the Pixel series has always had a reputation for having some of the best cameras available on smartphones… when it came to still photos. But they’ve never been industry-leading when it comes to video. 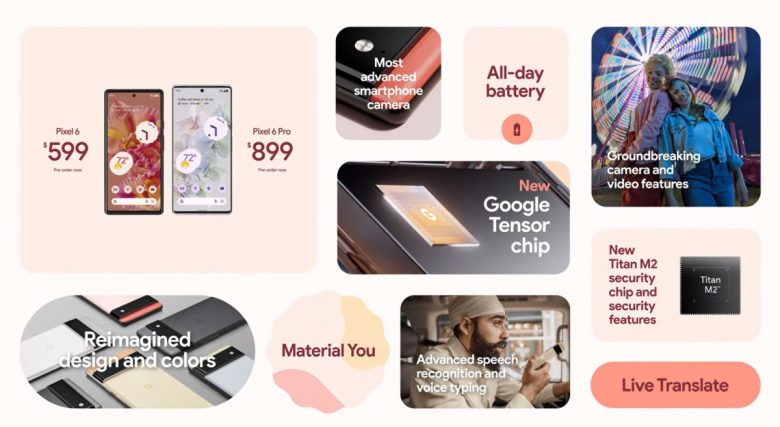 Part of the reason for that is that while Pixel phones have good camera hardware, they also rely on software for “computational photography” features like snapping multiple images and gathering data from all of them to create a single still image with high dynamic range colors.

Doing that at 60 frames per second is a lot more challenging than doing it for a single image. But Google says it made the algorithm for processing HDR images more efficient and then built part of that algorithm directly into the Google Tensor chip’s image signal processor. The end result is that the Pixel 6 can now record 4K HDR video at 60 frames per second.

That, and many other features are available on both the Pixel 6 and Pixel 6 Pro, since both have the same Google Tensor processor, 50MP primary camera, and 12MP wide-angle camera. 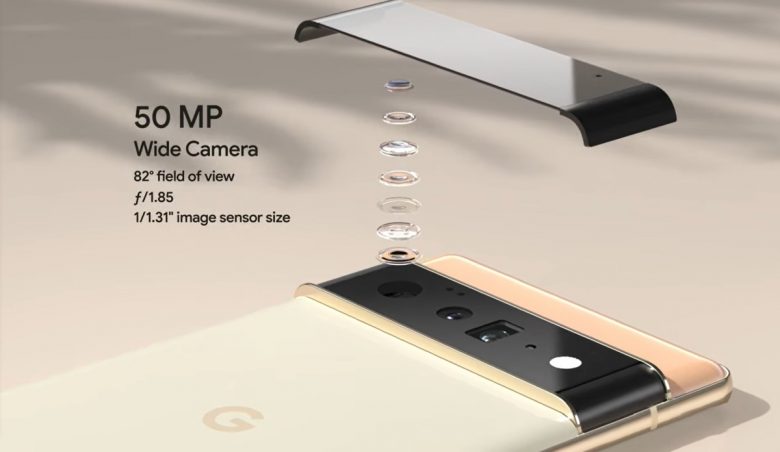 But if you opt for the Pixel 6 Pro you get an extra 48MP telephoto camera with support for 4X optical zoom (or up to 20X total zoom when using Google’s Super Res Zoom, which is basically digital zoom with Google’s algorithms).

The Pixel 6 Pro also has a bigger, higher-res display with a higher refresh rate, a bigger battery, a higher-resolution front camera, optional support for up to 512GB of storage, and support for ultra wide-band.

In addition to HDR video, Google says the Tensor processor aids with other sorts of on-device processing, including natural language processing for Google Assistant or voice typing. Google says it can be up to 3 times faster to type by voice than to use your fingers.

And other photography improvements include a feature called Real Tone, which is an improved algorithm for capturing portraits of people with different skin tones. Google says it’s trained its photography algorithms to do a better job with automatic face detection, white balance, stray light, and blur reduction. And Real Tone will also be available for the Google Photos app, allowing you to edit images after they’ve been captured, as well as for third-party apps including Snapchat.

Also coming to Google Photos for the Pixel 6? The long-promised “Magic Eraser” feature that uses machine learning to let you remove people or objects that you don’t want in the shot. 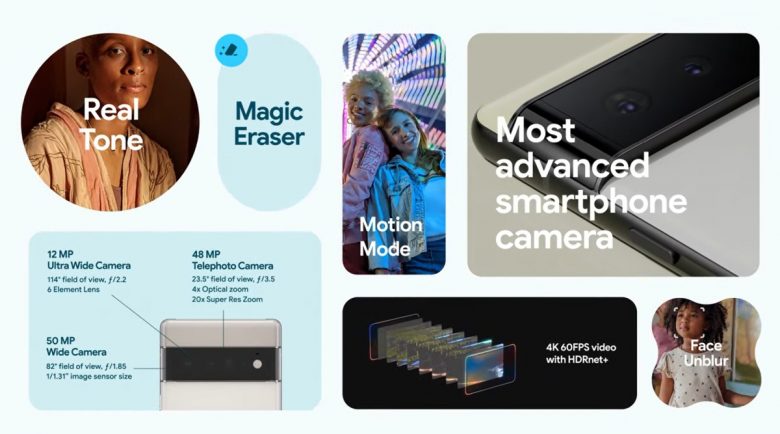 Google is also bringing Live Translate to the Pixel 6 smartphones, with on-device language detection and translation between different languages including English, French, German, Italian, and Japanese. This can, for example, automatically translate messages in chat apps like WhatsApp and Snapchat, or you can use “Interpreter mode” to have Google Assistant act as an interpreter when talking to speakers of 48 different languages. 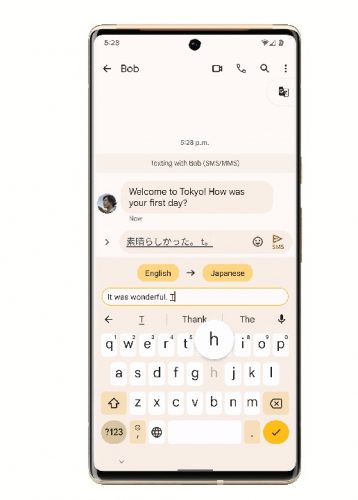 While AI and security features are key parts of Google Tensor, Google says the chip is also faster all-around than the Snapdragon 765G processor powering the previous-gen Pixel 5 (which isn’t shocking, since that was an upper mid-range chip, not a flagship-class processor).

Google says the Pixel 6 is 80% faster than the Pixel 5 when it comes to CPU performance, and its 20-core graphics offers up to 3.7X the graphics performance. 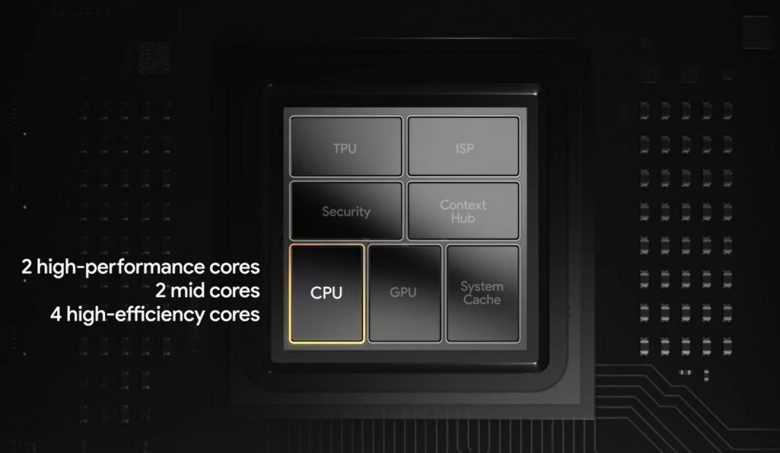 The Pixel 6 and Pixel 6 Pro will ship with Android 12 software and receive monthly security updates for at least five years, as well as occasional Pixel Feature Drop updates that will bring new features to the phones.

Interestingly Google is only promising to deliver three major Android OS updates for now. It’s possible that the company will extend that at some point, but if you were hoping to buy a phone today with a guarantee that it’ll run Android 16 at some point, Google isn’t guaranteeing that for the Pixel 6 devices at this point.

Google is also introducing a new way to pay for Pixel phones – in addition to buying the phones outright or in installments, you can sign up for a Pixel Pass subscription which bundles:

Google Fi customers will also get $5 off their monthly phone bill with a Pixel Pass subscription.