Grammarly recently announced a partnership with Samsung to bring grammar, punctuation, and vocabulary suggestions to the Samsung Keyboard app for Galaxy phones.

Now Google says it’s bringing at least one of those features to the Gboard keyboard for Pixel 6 smartphones: grammar correction. 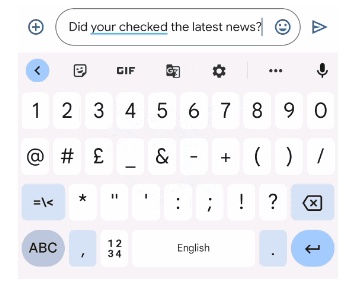 According to Google, its new Gboard grammar correction will check for spelling and grammar mistakes while you type, and offer suggested changes.

Google says it developed a mobile-friendly AI model that can provide grammar correction using just 20MB of storage and taking about 22ms to process 60 input characters. All the processing happens on your device without the need to rely on the cloud for processing.

Google says Gboard’s grammar detection kicks in any time a user types more than three words, whether that’s a complete sentence or not. Possible grammar mistakes will be underlined, while possible replacements will show up above the keyboard.

While Gboard grammar correction is rolling out as a Pixel 6 exclusive feature at launch with support for English language sentences only, Google says there are plans to add support for additional languages in the future.

As for whether grammar correction will come to other smartphones or tablets, Google isn’t saying. On the one hand, I think the implication of launching this as a Pixel 6-only feature is that the phone’s Tensor processor has the the AI chops to handle the feature quickly and efficiently… but that was also Google’s justification for making the Google Photos “Magic Eraser” a Pixel 6-only feature, and we’ve already seen evidence that it works just fine on other phones with some simple modifications.

Anyway, given the level of hate some of y’all have expressed for Grammarly’s aggressive advertising, maybe Gboard’s built-in solution could be an alternative. Or maybe we could just try to type gooder sentences on our owns.