Waydroid is an open source tool that installs an Android image in a container on Linux devices in order to let you run Android apps on Linux phones or PCs. But you know what else runs Linux these days? Windows PCs, thanks to Microsoft’s Windows Subsystem for Linux (WSL).

So Waydroid developer Erfan Abdi took the next logical step and used Waydroid to install Android in a container running within Windows 10 by using WSL. 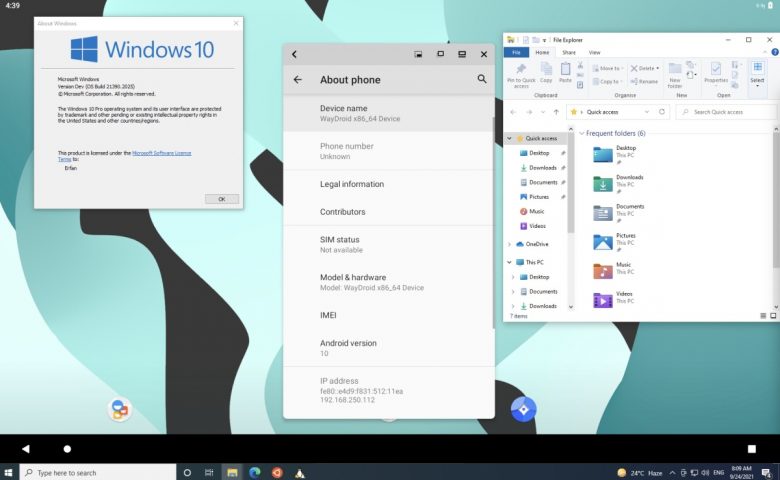 While Waydroid is very much a work in progress, it’s shown a lot of promise on smartphones in recent months, allowing users to install an Android 10-based version of LineageOS on phones running mobile Linux distributions such as Manjaro or openSUSE.

Since mobile Linux is still a pretty young platform, there aren’t nearly as many Linux apps designed for phones as there are Android apps, so this opens the door to running some Android apps and games on phones while using Linux as your primary operating system.

Waydroid in @thepine64 #pinephone with @openSUSE linux, just install it with zypper and test it, first boot is about 10min, then session is saved and works like a charm. I hope you enjoy it pic.twitter.com/Lsh1CKDazN

Running Android apps on a Windows PC is a bit of a different proposition. While it could open the door to using some mobile-only games (or apps like Clubhouse) on a desktop computer, it’s not like there’s any shortage of desktop-optimized apps, games, or websites. I imagine where something like Waydroid would really come in handy on Windows computers is Windows tablets – despite Microsoft’s best efforts to encourage developers to create apps specifically for touch-first devices like its Surface line of tablets, Windows has largely remained a keyboard and mouse operating system for decades.

And maybe that’s why Microsoft is also working to bring support for Android apps to Windows PCs. The company has been working on a Windows Subsystem for Android (WSA) that will work much like WSL, allowing users to run Android apps on Windows computers either by downloading them from the Amazon Appstore or by sideloading them.

The Windows Subsystem for Android is coming to Windows 11 some time after the operating system launches next month – Microsoft says it’s not ready for the general public just yet. And that means that you might be able to use the third-party, open source Waydroid to run Android apps on Windows PCs before you can use WSA.

That said, Waydroid for WSL isn’t available for download just yet, and when it is released, it won’t support hardware-accelerated graphics which could make it a bit sluggish. So it’s not entirely clear at this point whether Waydroid will arrive before WSA or if it’ll be more or less usable when it does. But one key advantage? It’ll support Windows 10 and not just Windows 11.