The latest compact computer from Chinese PC maker MINISFORUM is also the company’s most powerful to date at least on paper. Unfortunately after some early reviewers got their hands on the hardware, they found some major areas where the MINISFORUM EliteMini HX90 fails to live up to the company’s promises.

The computer measures 7.7″ x 7.5″ x 2.4″ and houses an AMD Ryzen 9 5900HX processor. It supports up to four displays, features a 2.5 Gbps Ethernet port, and has room for up to three storage devices. With pre-order prices starting at $629, the HX90 sounds like a winner. But MINISFORUM also claims to be using carbon fiber for the chassis, which may be misleading. And the company claims to be using liquid metal for cooling, and that appears to be not only misleading, but in a potentially dangerous fashion. Update: MINISFORUM has issued a response. More details below. 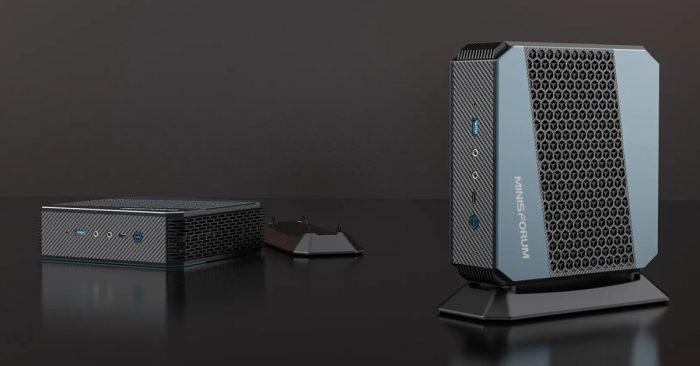 MINISFORUM plans to begin shipping the EliteMini HX90 to customers in mid-September, but the company has already sent some units to reviewers, and at least two YouTubers have posted in-depth examinations of some problems with the computer.

According to both Gamers Nexus and der8auer, the HX90 does seem to offer decent CPU performance at first glance, but the CPU temperatures are higher than you would expect for a system with liquid metal thermal paste applied to the CPU and heat sink. So they dissected the computers that had been sent to them and found that not only is there no liquid metal on the CPU, but there are little bits of it located elsewhere on the motherboard and chassis.

Since liquid metal is a highly conductive material, that makes those HX90 units ticking time bombs. It’s possible that hardware could short out or even catch fire.

Update: For its part, MINISFORUM says the problem only affects a handful of pre-release samples sent to reviewers and that the issue is related to some internal testing the company had been performing. But the fact that the company sent replacement units that suffered from the same issue was troubling, even if MINISFORUM says units sold via retail channels won’t have the same problem.

Der8auer also notes that while MINISFORUM’s website says the chassis incorporates carbon fiber, it appears to actually be all-plastic, with a carbon fiber-style design.

Update: According to MINISFORUM, the EliteMini HX90 uses “carbon fiber reinforced plastic” which is flame resistant and increases the mechanical strength of the chassis, but which “can look just like regular plastic.”

At this point, it seems like the safest thing for potential customers to do is wait until more real-world reviews of the final hardware confirm that the issues discovered in these pre-release models issues have been resolved.

This article was originally published August 4, 2021 and last updated September 13, 2021 to reflect the findings of Gamers Nexus and der8auer as well as a response from MINISFORM (shown, in full, below):

Recently,some Youtube reviewers have questions regarding our product and the way we market it. First of all, we would like to apologize for the confusion that we cause to reviewers and our customers. We would like to make some explanation regarding the questions that you may have pic.twitter.com/8EZ8Vr2hP5

Update 2: der8auer has posted a follow-up video examining MINISFORUM’s claims and looking at a retail version of the device. In a nutshell, there is a small amount of carbon fiber incorporated into the chassis which should help with durability, and liquid metal was actually applied properly… but it doesn’t seem to affect performance very much.

While the processor is designed for laptops and other mobile devices, it can also be a good fit for small form-factor desktop computers like the EliteMini HX90.

The processor does generate a fair amount of heat though, so the computer has a cooling fan as well as a ventilated case. 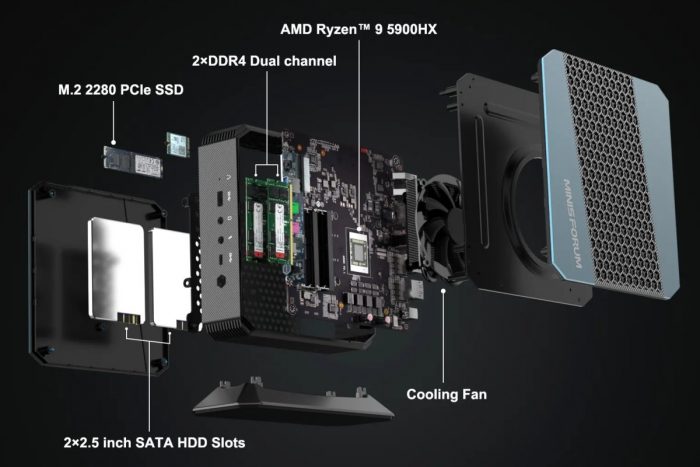 Other features include an Intel AX200 wireless card with support for WiFi 6 and Bluetooth 5.0 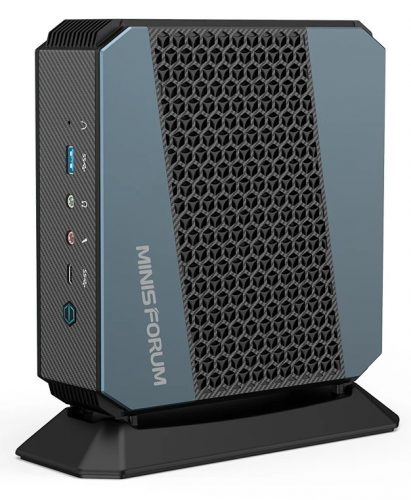 One thing the computer does not have is a Thunderbolt port, so while MINISFORUM is positioning the HX90 as a PC for gamers, it doesn’t have a discrete GPU built in and you won’t be able to add one using an external graphics dock either.

You can probably use it to play some games – after all, if handheld gaming systems like the AYA Neo and GPD Win Max 2021 can make do with AMD’s Radeon Vega integrated graphics, the HX90 should perform even better thanks to a much faster processor and somewhat more powerful GPU.

MINISFORUM sells the system in several different configurations. The starting price will get you a barebones model with no memory or storage, but you can pay extra for a system populated with up to 32GB of RAM and up to a 512GB SSD.