The Lenovo Chromebook Duet has been one of the most popular Chrome OS tablets since it launched last year, due to a mix of factors including the 10 inch tablet’s relatively low starting price, good-enough specs, and the fact that it comes with a detachable keyboard, making it a versatile device that can be used as a notebook or tablet.

Now Lenovo is introducing a new Duet model that has a bigger, better screen, a faster processor and… a higher price tag. The Lenovo Chromebook Duet 5 will be available starting net month for $430 and up. 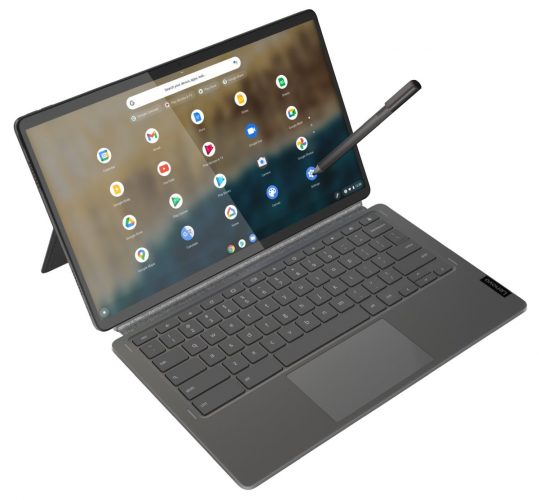 The new model has a 13.3 inch full HD OLED display, making it the first detachable Chromebook to sport an OLED screen. It’s also one of the most affordable tablets I’m aware of to feature an OLED display, although with support for only up to 400 nits, it’s not exactly the brightest OLED display around.

Lenovo’s new tablet is powered by a Qualcomm Snapdragon 7c Gen 2 processor and supports up to 8GB of LPDDR4x memory and up to 256GB of eMMC storage.

By comparison, the original Duet has a 10 inch display, a MediaTek Helio P60T processor, 4GB of RAM, and up to 128GB of storage. That model, which is often on sale for $249 or less, will continue to be available for the foreseeable future, with Lenovo selling the new Chromebook Duet 5 as a premium model. 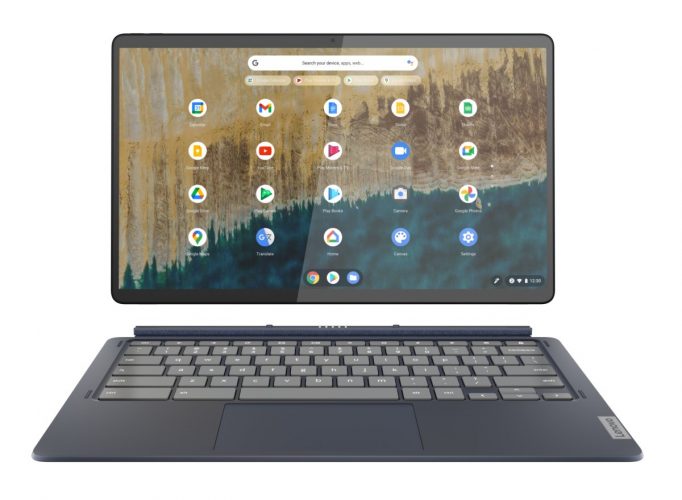 Other features for the new version include a 42 Wh battery, two USB 3.0 Type-C ports, a pogo-pin connector for the detachable keyboard, support for WiFi 5 and Bluetooth 5.1, and support for an optional USI 1.0 stylus for pressure-sensitive input.

The tablet weighs 700 grams, or about 1.5 pounds, and measures just 7.24mm (0.29 inches) at its thinnest point. It has an 8MP rear camera and 5MP front-facing camera, and quad speakers.

The Chromebook Duet 5 will be available globally, but it’ll only have that name in North America. In other parts of the world, it will be called the Lenovo IdeaPad Duet 5 Chromebook.