Basically it’s as if Asus took the Microsoft Surface Dial and instead of offering it as an optional accessory, the company built it right into its new laptop. 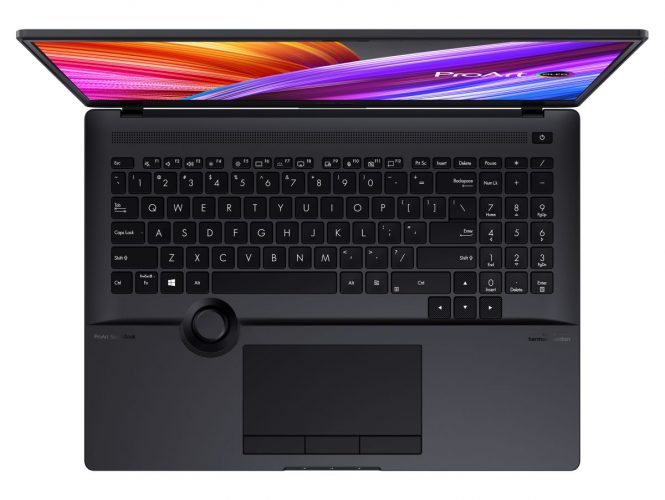 The Asus Dial is just below the keyboard, above and to the left of the touchpad, allowing you to turn the dial with one hand while using the other to use a mouse, keyboard, or touchpad.

Speaking of the touchpad, Asus has packed some extra functionality into it. You can use it as a writing or drawing tablet, since the oversized touchpad supports up to 1024 levels of pressure sensitivity when used with a stylus. There are also three buttons beneath the touchpad – the middle button can be used to access functions like pan, rotate, or orbit in supported apps.

Asus says two of the keys in the bottom row of the keyboard can also be customized to perform user-specified actions.

Another key feature of the Asus ProArt StudioBook Pro 16 OLED is in its name – the laptop has a 16 inch screen and is available with up to a 3840 x 2400 pixel OLED display panel.

Each model supports up to 64GB of DDR4 RAM, up to 4GB of NVMe storage (Intel models support PCIe 4, while AMD versions top out at PCIe 3.0) and have a wide selection of ports including HDMI 2.0, Gigabit Ethernet and USB Gen 2 Type-C and Type-A.

The Intel model also has a Thunderbolt 4 port, while AMD models have two USB4 Gen 3 Type-C ports instead.

Asus also plans to release Asus ProArt StudioBook 16 OLED laptops (note that the “Pro” is missing from the end of the name) that will come with NVIDIA RTX 3060 or 3070 graphics rather than RTX A series GPUs.

And the company is sort of bringing a version of the Asus Dial to lower-cost laptops as well. The new Asus Vivobook Pro 14X OLED and Asus VivoBook Pro 16X OLED both have a virtual dial section in their touchpads, allowing you to adjust settings in supported apps by moving your fingers across the virtual circle.