Amazon is preparing to update its Kindle Paperwhite eReader with two new models. Compared with the 4th-gen model, first released in 2019, the new Kindle Paperwhite will have a bigger display and an improved front light system. There’s also a Kindle Paperwhite Signature Edition model with a few extra features.

. Update: Amazon has officially introduced the new Kindle Paperwhite. It goes up for pre-order September 21 for $140 and up and begins shipping October 27, 2021. 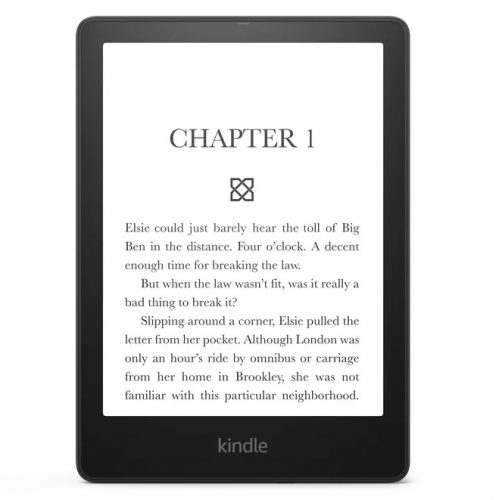 The new Paperwhite devices are expected to have a 6.8 inch E Ink display with 300 pixels per inch. That’s the same pixel density as the previous-gen model, but a larger screen (up from 6 inches). The new model is a little larger than the 2019 Paperwhite, but it’s only about half an ounce heavier.

Amazon is also upgrading the number of LED lights used to illuminate the display from 5 to 17. And the company is adding support for adjustable color temperature, allowing you to reduce the amount of blue light emitted at night time.

That last bit is the feature I’ve been waiting for. While rivals including Kobo, Onyx BOOX, and others have offered adjustable color temperature in mid-range eReaders for years, up until now Amazon has only offered it with the $250 Kindle Oasis.

The basic 5th-edition Kindle Paperwhite will have an edge-to-edge display with a “flush-front design,” and an IP8 water resistance rating, just like the previous-generation. And it will be available with at least 8GB of storage.

Amazon’s new Paperwhite Signature Edition starts with 32GB of storage and has two extra features: support for wireless charging and an ambient light sensor that can automatically adjust screen brightness depending on your environment.

Here’s a comparison of the new models with the current-gen Kindle Paperwhite, with pricing details as they were briefly listed on the Amazon Canada website.

via /r/Kindle, Good eReader, and The eBook Reader