The latest version of Sxmo adds a few new features including support for configuring a WiFi hotspot from your phone’s Network Menu and support for a proximity lock that automatically locks or unlocks the display based on proximity (so the screen doesn’t come on when your phone is in your pocket, for example).

Sxmo 1.5.0 also brings a number of performance and user interface tweaks and some under-the-hood changes. But overall, Sxmo continues to be a simple, speedy user interface for mobile Linux devices. In fact, it’s so well optimized that it can make even a low-end smartphone like the PinePhone feel fast. 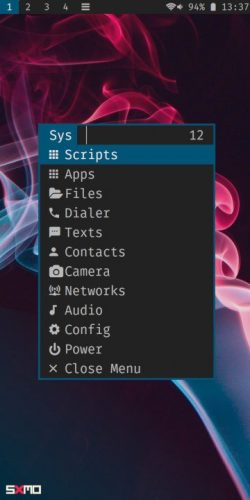 I’ve tried out Sxmo on my PinePhone a few times over the past year, and while the user interface takes some getting used to (it’s not as intuitive as or touch-friendly as say Phosh, Plasma Mobile, or Lomiri), it is zippy.

But soon you may be able to use Sxmo on devices other than the PinePhone. Developers have started to create device profiles for additional phones including the Purism Librem 5, Google Nexus 5, and Wileyfox Swift.

The software uses a dynamic window manager to tile windows in a series of windows that can be positioned side-by-side, one atop the other, or in other orientations if you want to view three or more apps at once.

Sxmo 1.5.0 is available as a user interface option for postmarketOS v21.06.1, which is a new stable build of that operating system that should be available soon. But folks who are running postmarketOS v21.03 Edge can try it out by running an “apk update && apk upgrade -a” command.

You can find a run-down of changes in Sxmo 1.5.0 in the release announcement, but a few highlights include: