Microsoft is busily working away on Windows 11 and its redesigned, modern interface. Andreas Kling, meanwhile, is building the wonderfully retro Unix-like SerenityOS from the kernel on up. 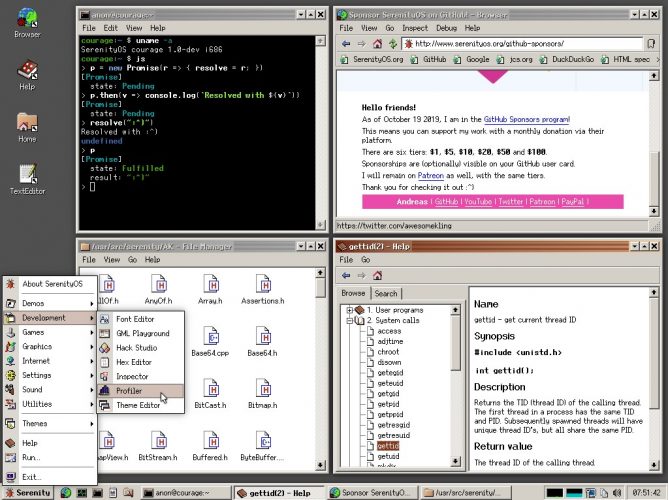 Maybe Fluent has really struck a chord with you. If, however, you feel like Windows interfaces peaked with Windows 2000, you’ll love the aesthetic in SerenityOS. Kling calls the project “a love letter to 90s user interfaces,” and it’s easy to see why. There are elements of classic Windows, MacOS and NeXT UIs and there’s no attempt to accommodate touchscreens the way most of today’s desktop OSes do.

“This is a classic mouse & keyboard system by design,” Kling posted on Hacker News. On the SerenityOS homepage he adds “this is a system by us, for us, based on the things we like.”

Kling and the SerenityOS have ported a number of apps and games already. Classics like Quake and the retro platformer VVVVVVV are playable and there’s a working port of Nesalizer for emulation fans (complete with sound support).

Perhaps the coolest thing about SerenityOS is the series of videos Kling has uploaded to his YouTube channel. They provide some very interesting looks behind the scenes. One that’s particularly fun is when he shows how to build a simple Breakout-style game — using the HackStudio IDE that was purpose-built for the OS he created himself.

Kling started work on SerenityOS about three years ago. Today, he’s working on its development full time and collaborating with more than 475 contributors. And yes, there’s a bug bounty program.

There’s plenty of work left to do on SerenityOS, naturally. Support for GPUs and large, higher-resolution displays is still in the works, for example. Don’t let that put you off taking SerenityOS for a spin, however. Boot it up on your virtualization platform of choice and marvel at what Kling and his team have built from scratch in just over three years.