As expected, Chinese phone maker is launching a wireless charging system for smartphones that connects to the back of a phone via magnets. 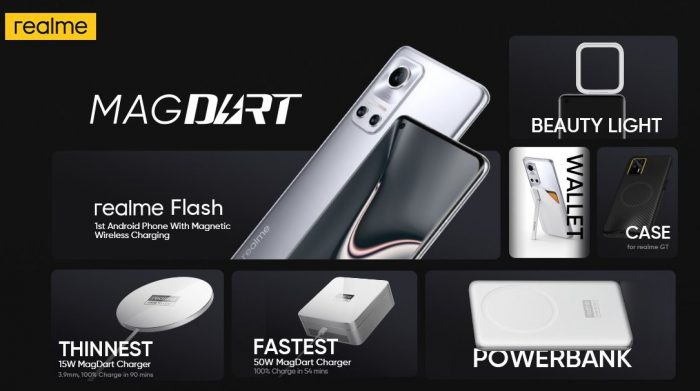 Realme is launching the MagDart ecosystem with three products

The company is demonstrating the new magnetic charging system with a concept phone it calls the Realme Flash, featuring a 4,500 mAh battery. It’s unclear whether this particular phone will come to market, since it’s described as a concept device. But since it supports magnetic accessories, Realme isn’t stopping at wireless charging add-ons.

The company is also showing off a MagDart Beauty Light which adds a set of 60 mini LED ring lights around the phone’s rear camera plus a light switch that also allows you to set the color temperature with a long press. The ring light can also flip up and face forward for use with the smartphone’s selfie camera. And it also has reverse wireless charging coils built in.

Realme’s MagDart Wallet is an small “vegan leather” clip that snaps onto the back of the phone, allowing you to store up to three credit cards or other cards. It also has a flip-out aluminum kickstand that you can use to prop up the phone for watching videos or making video calls.

And the MagDart Case, meanwhile, is an accessory for the RealMe GT smartphone that adds support for MagDart accessories.

There’s no word on pricing or availability yet, but it’s worth noting that while Realme does sell phones outside of its home country of China, they have yet to reach the United States. It’s still always interesting to see a company build its own alternative to an Apple product and then try to one-up Apple in the process.