Amazon stopped selling Kindle eReaders with 9.7 inch displays years ago, instead focusing on the 6 inch Kindle and Kindle Paperwhite and 7 inch Kindle Oasis.

But while Amazon dominates the eReader space, there are other companies continue to produce eReaders in a range of sizes. And one of those companies is bringing back the 9.7 inch screen size with its next model. The new PocketBook InkPad Lite is coming this fall for $299 in the US, or around €259 in Europe. 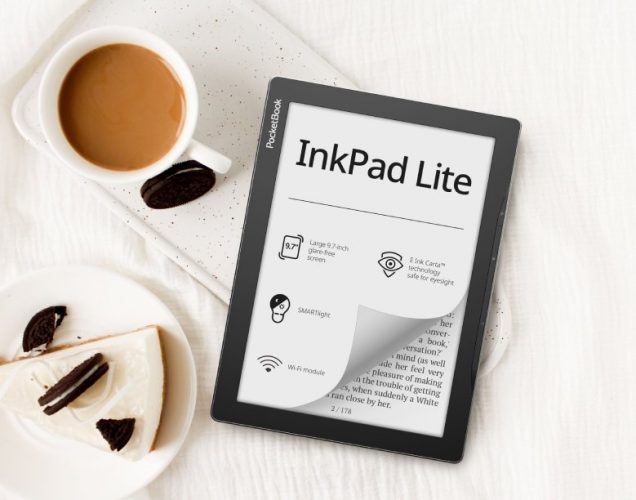 PocketBook is already taking pre-orders in Russia for 19,999 rubles (about $275), and the company says the InkPad Lite will be available for purchase in the US from Amazon and Newegg in late September or early October.

Those prices makes the InkPad Lite a little more expensive than a Kindle Oasis or Kobo Forma, it’s still less than you’d pay for most eReaders with large displays.

Unfortunately PocketBook also seems to be using a fairly old, low-quality display for this model. It may be bigger than most other popular eReaders, but with a 1200 x 825 pixel E Ink Carta display, the InkPad Lite only packs 150 pixels per inch. The entry-level Kindle eReader, by comparison, has a 167 ppi display.

The PocketBook InkPad Lite also has just a 1 GHz dual-core processor, 512MB of RAM, 8GB of storage, and a 2,200 mAh battery. But it does at least have a microSD reader, a USB-C port, and a front-lit display with support for adjustable color temperature.

It also has page turn buttons on one side of the screen, as well as a touchscreen display.

PocketBook’s new 9.7 inch eReader supports WiFi 4, but seems to lack Bluetooth support and has no support for audiobooks or music playback. It does support 19 different eBook formats and 4 image formats, and in addition to eBooks, it has a handful of applications include a web browser, RSS reader, calculator, notes app, and Soduku and Chess. There’s also Dropbox support.