The MutantC is a handheld computer with a small inch touchscreen display, a slide-out keyboard, a Raspberry Pi and a battery pack, all held together in a 3D printed case. The developer of this DIY handheld introduced the first model in 2019, and has been refining the design ever since.

The latest version is the MutantC v4, and it’s a versatile solution for folks looking to design or build their own handheld (the designs are open source). And there’s a new “Lite” version with fewer parts that lowers the cost and complexity of building. 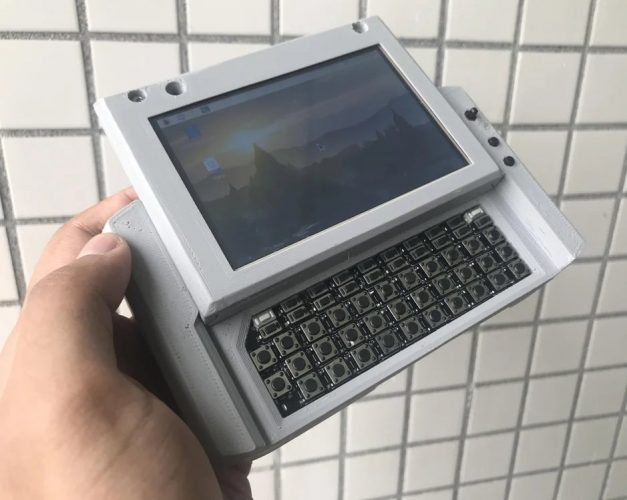 Both the Lite and Regular versions are designed to work with most Raspberry Pi devices (or similarly-sized single-board computers) and you can choose from several compatible displays including 2.8 inch, 3.5 inch, and 4 inch LCD screens.

You will need some custom parts – there are three printed circuit boards that go into the MutantC v4, but the developer says it costs about $15 plus shipping to have them made to order. And you’ll either need a 3D printer to make the case or you can order that online as well.

Since the schematics and design files are all available, you can customize them. But even if you go with the design exactly as it is, you can still customize the MutantC thanks to a 20-pin expansion header with support for add-on modules including a GPD module.

Other features include a real-time clock, vibration motor, an LDR sensor (for measuring light), and an IR transmitter for controlling your TV or other devices. And all of the Raspberry Pi ports are exposed, which means you also have USB, Ethernet, and HDMI ports to play with.

Some of the changes in the latest version include the addition of an ESP32-S2 module, an updated battery system that makes it easier to remove the 18650 battery (which is said to offer up to 8 hours of battery life).

The new Lite model has a smaller parts list, leaving out some features like motion, light, pressure, and temperature sensors, LED lights, and the IR transmitter and vibration motors in order to make the build process a little more beginner-friendly. But when fully assembled, you still end up with a handheld computer that looks a bit like an old-school OQO UMPC, but which is powered by modern hardware and capable of running GNU/Linux distributions like Raspbian.

You can find build instructions at Instructables, case design files at Thingiverse and GrabCad and more details at MutantC.GitLab.io.