The Morefine S500+ is a compact desktop computer with support for up to an AMD Ryzen 9 5900HX processor, the ability to drive up to three displays, and configurations available with up to 32GB of RAM and 1TB of solid state storage.

First announced in July, the Morefine S500+ is now available for pre-order through an Indiegogo crowdfunding campaign, with prices starting at $499 for a model with Ryzen 5000U series processors or $639 for versions with more powerful Ryzen 5000H chips. Both models are expected to ship to backers starting in September. 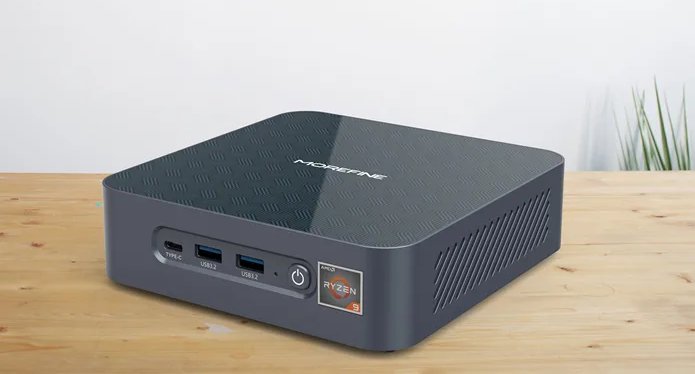 Here’s a breakdown on the pricing/configuration options up for pre-order:

Each model is the same size, at about 5.9″ x 5.7″ x 1.6″ and while Morefine says its active cooling system is good enough to keep the system running efficiently, I have to think that models with the 45-watt Ryzen 9 5900HX processor will probably generate quite a bit more heat than versions with AMD’s 15-watt U-series processors.

Whichever version you opt for, you get a magnesium-aluminum chassis and a cooling system that includes a “low-noise” fan, copper heat sink with dual heat pipes, and thermal compound.

There’s also a 19V/6.32A DC input for the computer’s power supply, but Morefine notes that if you have a 20V/5A USB-C power supply you can use that instead of the included AC adapter.

The computer has two SODIMM slots for memory and an M. 2280 slot for PCIe NVMe or SATA SSDs. Each model also has a wireless card – configurations with the Ryzen 9 5900HX processor get an Intel AX 200 card with support for WiFi 6 and Bluetooth 5.2, while the Ryzen 5000U versions support WiFi 5 and Bluetooth 4.0.

Morefine includes a Vesa mount for folks that want to connect the computer to the back of a display.

It’s worth noting that the company says the Morefine S500+ “works with Windows 10 and meets the requirements for the upcoming Windows 11 release, a well as Ubuntu 20.04 LTS and other recent Linux distributions,” but it’s unclear whether the computer actually ships with a valid Windows license, something that Chinese PC makers sometimes exclude.