When the Game Boy Pocket was released in 1996, it was a smaller, lighter alternative to the original Game Boy with an improved (but still greyscale) display). But it still offered similar battery life (about 10 hours), while running on just two AAA batteries (rather than four AA batteries).

But over the past few decades, DIY hardware hackers have modified the Game Boy Pocket with new features like higher-quality IPS LCD displays which can cause additional power drain. So folks have also found ways to equip it with more powerful, rechargeable batteries. And now one person has added something more – an integrated solar panel. 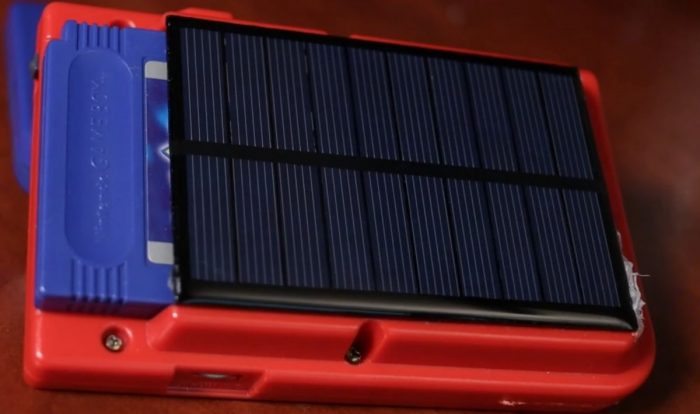 Here’s the basic idea. The original black and white display was replaced with a backlit LCD screen. The system was modified to support a 1,000 mAh 3.7 volt LiPo (Lithium Polymer) battery capable for running for 7 to 12 hours on a charge even with the new screen.

A USB-C charging controller and port were also added, allowing you to plug in modified Game Boy Pocket for charging.

Keep in mind that small solar panels don’t output a lot of power. Under ideal settings, it can output 5V at a maximum of 150 mA, which means that it takes about 7 hours to fully charge the modified Game Boy Pocket’s 1,000 mAh battery. And that’s assuming you’ve got plenty of direct sunlight.

On the other hand, use a USB-C charger and you can take the battery from 0 to 100% in about an hour.

Still, if you’re going to be off grid for a while and want to be able to play some 30 year old games on the go, a solar powered Game Boy Pocket might be the way to go.

You can find far more details about this project in an in-depth video from the Houston Museum of Natural Sciences.