The AYA Neo is a handheld gaming computer featuring a 7 inch touchscreen display, built-in game controllers, and a design that resembles a Nintendo Switch. But under the hood are the guts of a PC and the ability to play many Windows PC games.

When the AYA Neo first went up for pre-order through an Indiegogo crowdfunding campaign, only one processor option was available: an AMD Ryzen 5 4500U chip. Now an upgraded version with a Ryzen 7 4800U processor has been announced. It’s called the AYA Neo Pro, and it’s expected to ship in September.

Incidentally, the Ryzen 7 4800U is also processor that GPD is using for the AMD-powered version of the GPD Win Max 2021 handheld gaming computer, which has an 8 inch display, game controllers, and a physical keyboard.

AYA plans to continue selling the original Neo along with the new Neo Pro. There’s also a Neo Pro “Retro Power” bundle that comes with retro-inspired color scheme, plus retro-inspired accessories including a 108W USB-C fast charging adapter and a custom portable docking station and mechanical keyboard (which, I believe, may be sold separately).

Here are the expected prices for all three variations moving forward:

Folks who have already pre-ordered a standard AYA Neo from Indiegogo, but who have not yet had their order ship, can upgrade to a Pro model for $$200 to $300, depending on the version they’ve already paid for. Upgrades to the Retro Power range from $250 to $400. 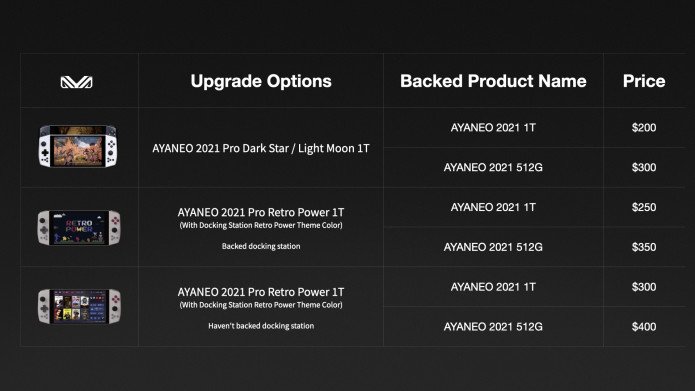 You can find more details in the August 8th update on the AYA Neo crowdfunding page.

Or if you haven’t yet ordered a handheld gaming PC, you can check out our comparison of the AYA Neo, ONEXPLAYER, GPD Win 3 and Win Max 2021, and Valve’s Steam Deck to help make your choice.