Google’s Android Accessibility Suite is a collection of apps that make it easier for people with disabilities to interact with Android phones and tablets. And starting with Android 12, a new accessibility feature will make use of your phone’s camera to let you control your phone with your face.

According to a report from xda-developers, a beta version of Android Accessibility Suite 12.0.0 was included in the latest Android 12 beta, and it has a feature called a “Camera Switch” that lets you use facial gestures to interact with your mobile device. 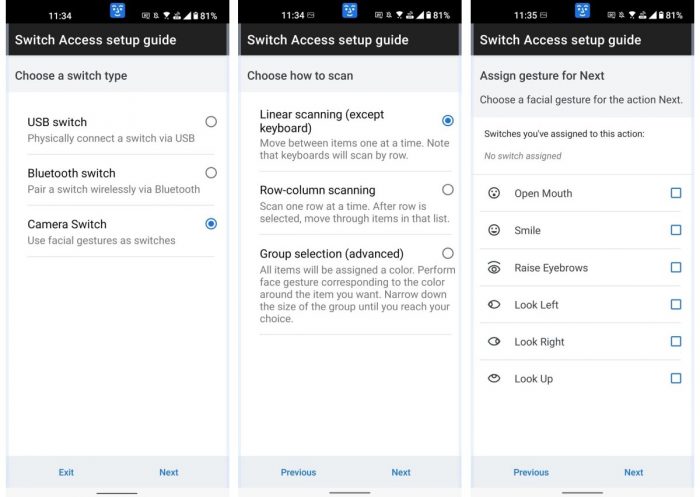 Google first added support for “Switch Access” to Android’s accessibility features in 2017. At the time, the idea was to let you use a physical hardware device with at least two buttons (for “next operation,” and “enter”). Those button controllers could be USB or Bluetooth devices.

The addition of a Camera Switch to Android 12 means that you don’t need third-party hardware to control your phone using Switch Access. Just choose the Camera Switch option, set up your preferences, and you can use facial expressions to navigate through individual items, rows and columns, or groups of items (arranged by color).

Screenshots posted to xda-developers show that available gestures include:

You can also adjust settings for the “size” or duration of a gesture, to prevent the phone from reacting to false positives.

This is so cool. You can now navigate your phone using just facial expressions! https://t.co/OLkTxBya4J pic.twitter.com/C0yC9EQyO2

It’s possible that additional gestures or actions may be added in the future. And it’s also possible that the Camera Switch feature may not require Android 12 to function – xda-developers was able to sideload the application on a device running Android 11. So perhaps Google will roll out this feature first with the version of the Android Accessibility Suite designed for Android 12, but eventually make it available to folks running older versions of Android with an update delivered through the Google Play Store.