This week ADATA is introducing a bunch of upcoming products, including DDR5 memory, an SDXC card capable of speeds as high as 800 MB/s, and new PCIe Gen 4 storage.

But one new product that stands out is the ADATA SE920 external SSD, which the company says will use a USB4 2×2 interface to deliver speeds up to four times as fast as portable SSDs that use a USB 3.2 interface. 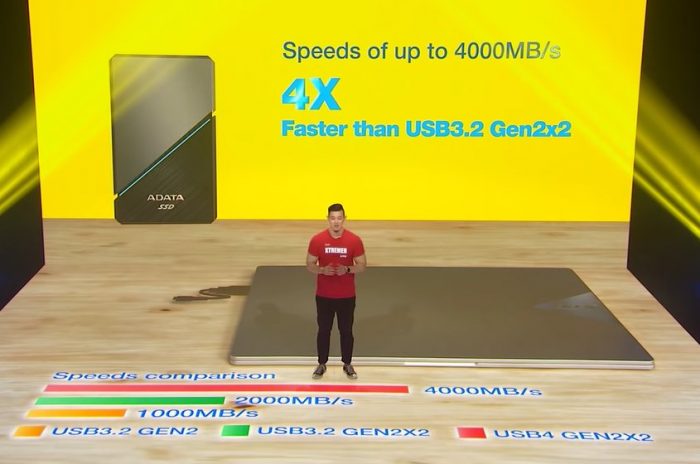 ADATA hasn’t announced pricing or a release date yet, but the company says the SE920 portable SSD will be able to support data transfer speeds up to 4,000 MB/s, which is considerably faster than the latest SanDisk Extreme or Samsung T7 SSDs, which top out at 1,050 MB/s, or the ADATA SE900 or WD Black P50, which have maximum speeds of 2,000 MB/s.

The company says that, among other things, it developed proprietary heat conduction technology for the SE920 in order to keep the SSD from overheating while in use.

What the company hasn’t said is what kind of controller it’s using, what kind of SSD will be under the hood, or any other technical details. There’s also no breakdown of read vs write speeds (the former is typically faster than the latter).

Still, if the SE920 can deliver on its promise, it will be a portable, external SSD that offers the kind of data transfer speeds that have typically been limited to some of the best internal SSDs until now.

Just keep in mind that you’ll need a computer with Thunderbolt 4 (or equivalent USB4) ports to get those kinds of speeds.

via Tom’s Hardware and HotHardware