The Microsoft Store is a combination of app store, game store and movie store. And when Windows 11 debuts later this year, it’ll bring an updated user interface. But it’ll also bring support for more types of applications: Microsoft says you’ll be able to find and download Universal Windows Platform (UWP) apps, Progressive Web apps, Android apps, and Win32 apps all from the Store.

But it turns out that while users will be able to download Win32 apps from the Microsoft Store, they won’t be able to update those apps using the Store’s services… which honestly makes this feature a little less exciting. 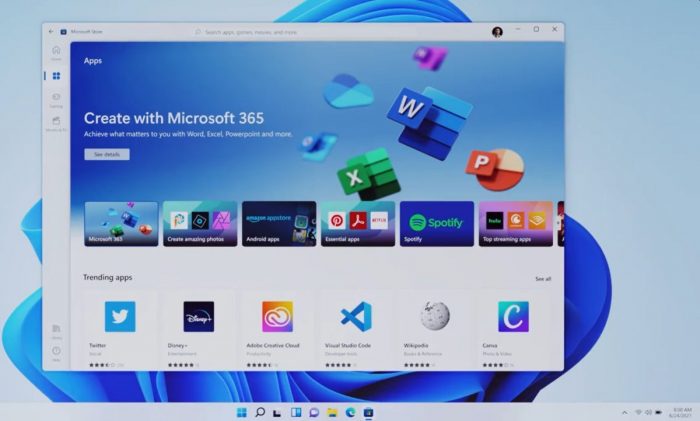 Win32 apps are basically the kind of Windows applications that you typically install with an .exe or .msi file today. In other words, the vast majority of software available for Windows is in the form of Win32 applications.

Right now most users get these programs by downloading them from the internet, either from the developers’ website or from a third-party storefront or software directory. But with Microsoft adding support for Win32 apps to the Microsoft Store, developers will have the option of submitting their apps without converting them to Universal Windows Platform apps first.

That means you may be able to download Win32 apps, UWP apps, video games, movies, and other content all from the same place. With Windows 11 adding a subsystem for Android, Microsoft has even partnered with Amazon to bring Amazon Appstore integration to Windows 11, allowing you to install Android apps.

There are a number of benefits to using app stores. You have one place to look for all of your apps (assuming they can be found in the store). You can use the same billing method to handle payment for all purchases, in-app payments, or subscriptions. And if developers release updates with new features or security fixes, app stores typically handle the infrastructure necessary to roll out those updates to users.

With the new Microsoft Store though, the app updates are only available for UWP or Android apps and not for Win32 apps.

Developers can, of course, build their own automatic updates feature. If you’ve ever used a web browser like Chrome or Firefox, you probably know how this works – when a new updates is available the browser an automatically download and install it in the background and then the next time you load the browser you’re on the latest version. Some applications simply alert you when a new build is available though, and either let you download and install it from within the app or click a link to download the latest version from a website.

In other words, users still get the benefits of searching for their apps in a single place (assuming enough developer submit their apps to the Microsoft Store for it to be worth searching) and using the same billing and payment system for multiple apps. But Win32 app updates? Those will be the responsibility of developers.

If you want to know before installing an app from the Microsoft Store whether it will receive updates delivered by Microsoft or by the app developer, Microsoft’s Rudy Huyn says that information will be shown in app listings with a line that says something along the lines of “Provided and update by Microsoft Corporation.”

The new Microsoft Store will debut with Windows 11, but Microsoft also plans to bring it to Windows 10. It’s unclear if all of the features available to Windows 11 users will be included in the version coming to Windows 10 though.