That could make this device, which sells for $120, a much more versatile gadget. That said, there are always going to be some limitations when running desktop or mobile applications on devices with E Ink displays, and  installing the Linux-based postmarketOS does require opening the case and replacing the pre-installed software, so there is a chance that you may mess up your device. So proceed with caution.

The Kobo Clara HD isn’t a particularly powerful device by tablet standards. It has a 1 GHz Freescale Solo Lite single-core processor, 512MB of RAM and 8GB of storage. The eReader supports WiFi 4 (802.11b/g/n) and has a micro USB port for power and data.

But it also has a 6 inch, 1448 x 1072 pixel E Ink touchscreen display that can display a static image indefinitely, be seen easily in direct sunlight, and which only draws power when the contents of the screen are refreshed (or when you’re using the front-light to illuminate the display). That means it has battery life measured in weeks rather than hours, and many readers prefer E Ink to LCD or OLED screens, since they can cause less strain on the eyes.

Developer jetomit explains that in order to install postmarketOS on the device, you need to open the case, remove the SD card that functions as its storage, and run commands that will replace the default Kobo operating system on the card with the Linux-based postmarketOS.

While postmarketOS was originally developed for smartphones (with the goal of extending the longevity of older phones after their makers stop issuing updates), it has since been ported to a wider range of devices including tablets, and now eReaders. The version for the Kobo Clara HD includes a mainline Linux kernel as well as Kobo’s vendor-specific kernel and patches from Andreas Kemnade.

Update: Braam notes that one of the reasons for display issues in the video was a bit sluggish at least partly due to the fact that the device was trying to push 256 shades of gray to a screen that only supports 16. After reducing the colors, he reports that things look much better. 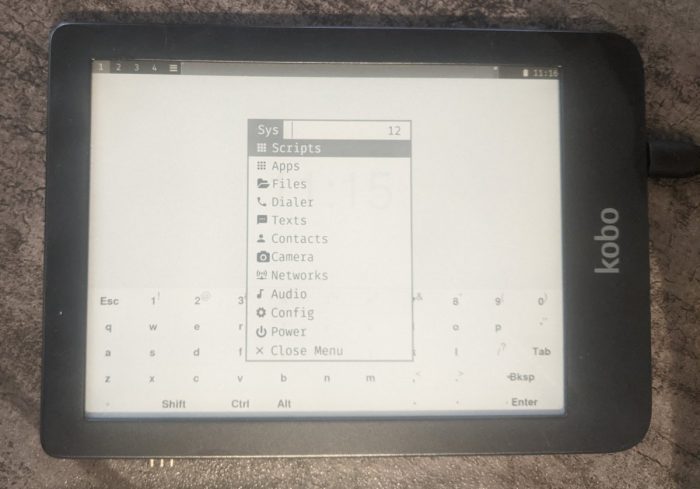 WiFi, touch, and other basic features all seem to work, but the user interface is not optimized for ePaper displays, so some user interface elements look wonky and the screen can take a while to refresh.

But… it’s now at least theoretically possible to turn the Kobo Clara HD into a Linux tablet. And now that the first steps have been taken, if there’s enough interest from developers, it’s possible that we could see some ePaper-specific software developed for this or other Linux-based operating systems for the Kobo Clara HD or other E Ink devices.

You can find more details about this build in jetomit’s postmarketOS merge request.