There’s no shortage of portable displays that you can plug into a laptop, tablet, smartphone, or other gear when you need some extra screen space on the go. And theoretically there’s nothing stopping you from plugging those screens into an xBox or any other game console.

But the new xScreen is a portable display designed just for the xBox Series S. It’s a small display that latches onto the back of the game console, turning it into a laptop-like device that you can use for gaming anywhere… as long as you’re not too far from a power outlet. There’s no battery, so you’ll still need to plug in the xBox. 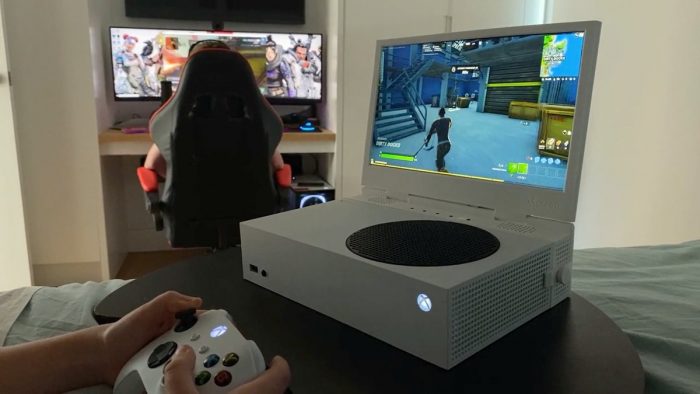 The xScreen hit Kickstarter this week with early bird pricing of less than $200 US and a promise that the device will ship to backers in January, 2022 (it’s always best to take crowdfunding campaign ship dates with a grain of salt though).

It features an 11.6 inch, 1920 x 1080 pixel display with a 60 Hz refresh rate and integrated stereo speakers as well as buttons for adjusting the volume and brightness.

It weighs about 1.5 pounds, and the xScreen is designed to connect directly to the HDMI and USB ports of the xBox Series S without the need for any additional cables. Since it draws power over USB, the only cable you’ll need is the xBox power cable.

There are a pair of removable latches that hold the screen firmly in place while you’re using it. And once it’s in place, it’s up to you to decide whether you ever want to remove it again – there’s a laptop-style hinge mechanism that allows you to fold the screen down over the xBox like a laptop to it takes up less space when you’re not using it or when you’re traveling. 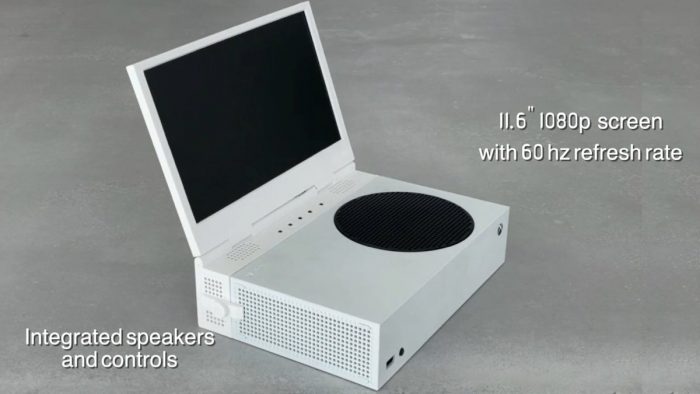 While the xBox Series S isn’t the most powerful of Microsoft’s game consoles, it is both the cheapest (with a starting list price of $300) and smallest (measuring about 10.8″ x 5.9″ x 2.5″). That makes it the most likely candidate for this style of accessory.

The only catch is that the xScreen is most likely only going to appeal to folks who already own an xBox Series S because it’s kind of hard to get your hands on a new one these days –  they’re out of stock at most retailers, although Walmart does have some for $390 and up.