While announcing the feature this week, Microsoft noted that Android apps will be available in the Microsoft Store on Windows 11 computers, thanks to integration with the Amazon Appstore. But it turns out that’s not the only way to install Android apps – you’ll be able to sideload APK files to get just about any Android app to run on Windows. 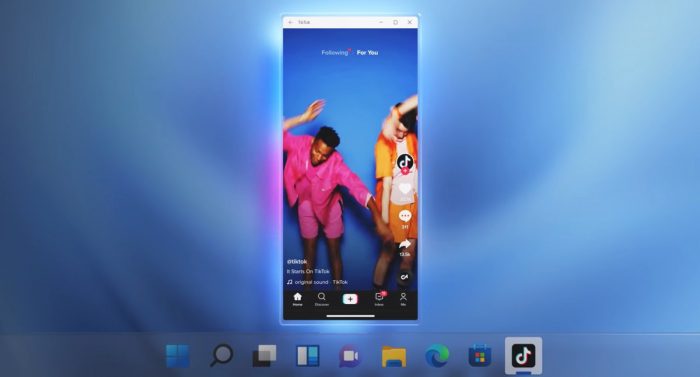 Microsoft developer Miguel de Icaza confirmed sideloading support in a post on Twitter, although details about exactly how you’ll go about sideloading aren’t clear at the moment.

The good news is that this means users will be able to install applications that may not be available from the Amazon Appstore, which only has about half a million Android apps at the moment (not all of which will likely be coming to Windows, since it’s up to developers to submit their apps for inclusion in the Microsoft Store).

So if the app you’re looking for isn’t in the store, you can download it from a trusted third-party app store or directory.

Windows 11 has an Windows Subsystem for Android (WSA) that basically installs an Android Open Source Project (AOSP) build of Android in a virtual machine, but which also allows installed apps to be integrated into the Windows user interface. So rather than opening a virtual Android window every time you want to run an Android app, those applications will show up as resizable windows that can be placed alongside other native Windows applications on your desktop.

You’ll also see shortcuts for Android apps in the Start Menu and on the taskbar. And they’ll support new Windows 11 features like updated support for window snapping and enhanced gesture support for touchscreen devices.

But there are a few things to keep in mind. One is that sideloaded apps will likely have to be updated manually if you want the latest bug fixes, security, or feature updates. That’s something that would normally be handled by the app store, but if you install an app from outside the store, then it’s up to you to keep your software up to date.

Another issue that may arise is that not all Android apps you attempt to sideload will necessarily be fully supported. For example, apps that normally rely on Google Mobile Services may not function properly without the Google Play Store and other Google services installed (and it’s unclear whether it’ll be as simple to sideload those features on a Windows PC as it is on, say, an Amazon Fire tablet).

That means apps like the Google Play Store or Google Maps won’t run without Play Services. But as xda-developers points out, certain third-party apps may be missing some functionality. For example, you can install the Twitter app, but you won’t receive push notifications.