When Windows 11 launches later this year it’ll include a brand new version of the Microsoft Store with support for a wider variety of apps including Universal Windows Platform apps, Progressive Web apps, and Win32 apps. Users will also be able to find Android apps in the Microsoft Store thanks to a partnership with the Amazon Appstore, a new Windows Subsystem for Android, and Intel Bridge technology that allows Android apps compiled for ARM chips to run on computers with Intel or AMD x86 processors.

But the new Microsoft Store isn’t just coming to Windows 11. It’ll also roll out to Windows 10… although I suspect that some features won’t be available. 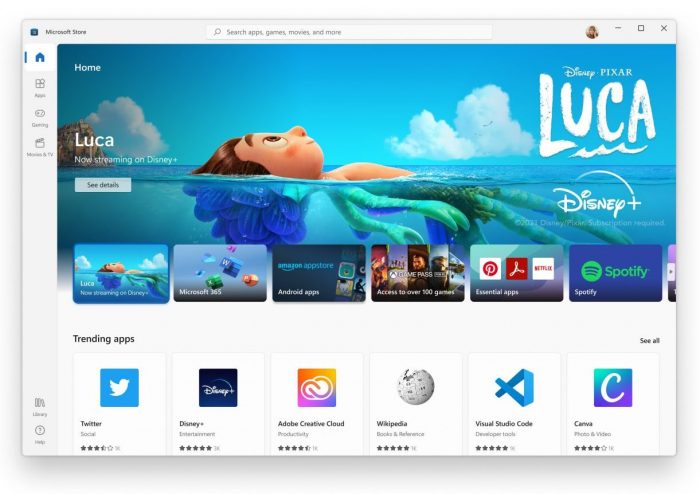 In a blog post, Microsoft explains that the new Store is “coming soon to both Windows 11 and Windows 10, and that it’ll provide a one-stop shop for applications, games, movies, and TV shows.

The updated store has a streamlined user interface, support for curated “Stories” and collections for recommended apps and games, and support for a pop-up store that allows you to click an install link on a website to start installing an application through the Microsoft Store without switching between apps.

For developers, Microsoft notes that another change coming to the Store is related to customer billing. Developers can continue to use the Microsoft Commerce platform and allow Microsoft to take a cut of revenue. But starting July 28, 2021 they’ll also be able to use third-party commerce platforms and keep all of their revenue without paying any fees to Microsoft.

That last bit could help encourage more Windows software developers to submit their applications and games to the Microsoft Store – right now it has a reputation for being a bit of a wasteland, despite having some popular apps from Netflix, Spotify, Adobe, and others.

Support for more types of applications could also help bridge the app gap. And adding support for Android apps could have a big impact as well — although it’s unclear at this point if that functionality will be available for Windows 10 or if you’ll need Windows 11 to run Android apps.

Amazon’s announcement confirms that its Appstore will be available on Windows 11, but there’s no mention of Windows 10.

Bringing the Microsoft Store to Windows 10 makes sense because it’s likely that a lot of users will be slow to upgrade. While many Windows 10 PCs released in the past few years will qualify for a free upgrade, the minimum system requirements for Windows 11 are a bit stricter and many older (and some recent) computers don’t meet them. Even many Microsoft Surface devices released before 2017 won’t officially support Android 11.