Microsoft has officially unveiled Windows 11, the next major version of the company’s operating system for desktop, laptop, and tablet computers. It will be available as a free upgrade for compatible Windows 10 PCs by the 2021 holiday season.

You can check to see if your computer is eligible by downloading the compatibility checker from the Windows 11 website, but with minimum system requirements including a 1 GHz dual-core processor, 4GB of RAM, 64GB of storage, and a 720p display, odds are that most Windows PCs shipped in the past few years should qualify.

As expected, many of the biggest changes from Windows 10 are cosmetic – the user interface has received a major visual refresh with rounded corners, a taskbar that’s in the center by default (although it can be moved), and support for a new type of widgets that slide out when you want to view your feed. But Microsoft is also promising improved performance, reduced power consumption for better battery life, and some features that could make multitasking easier, make it easier to use Windows on touchscreen devices, and more. Windows 11 will also include native support for running Android apps. 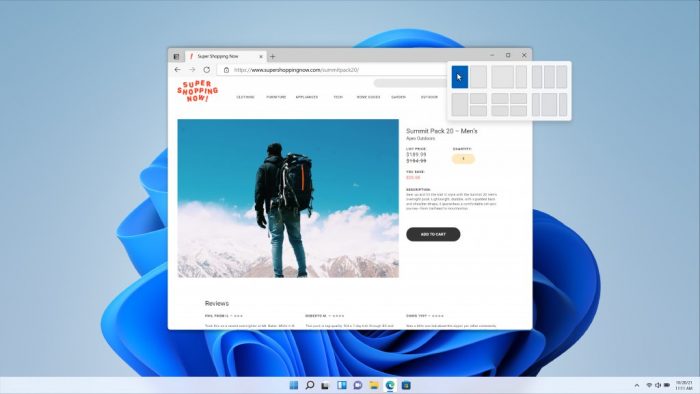 And from a usability standpoint, Microsoft is introducing a major update to the way window snapping works, bringing support for quickly arranging applications on your screen or across multiple displays. You can also save Snap Groups, allowing you to quickly relaunch a set of apps from the taskbar. And if you have a series of windows running on an external display, when you disconnect a laptop from that screen those windows will minimize to a Snap Group and they’ll automatically be restored when you plug your notebook back into your display. 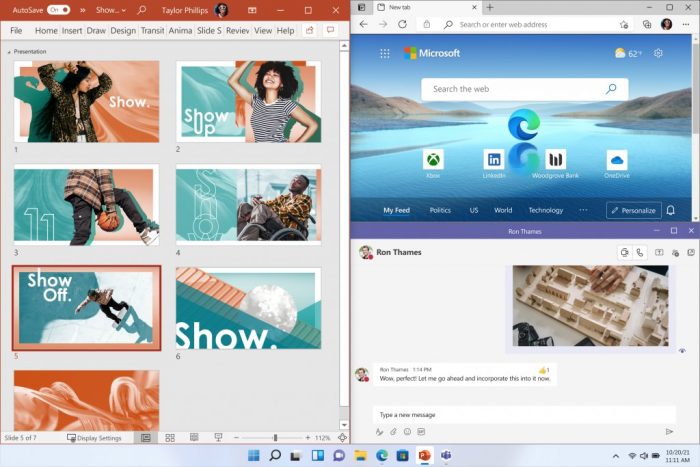 Microsoft Teams is now baked into Windows, with a Chat icon in the taskbar that you can use to make text, voice, or video calls to anyone in your network no matter whether they’re using a PC or a mobile device running Android or iOS. 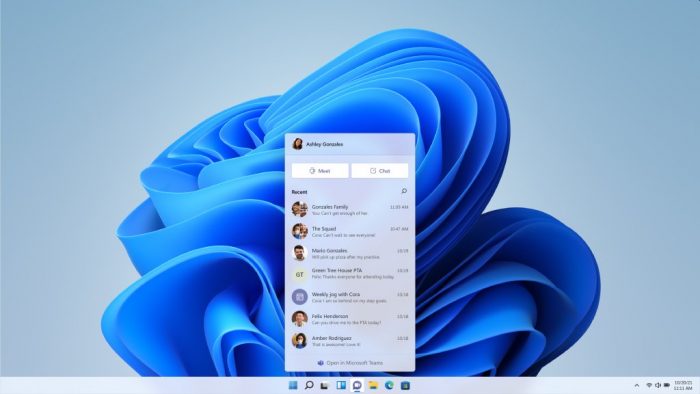 And gaming updates include support for Auto HDR for improved color and DirecStorage, which can load gaming assets from an SSD directly to the GPU without hogging CPU resources. Xbox Game Pass is also built into the Windows 11 Xbox gaming app, but you’ll still need a paid subscription to take advantage of it.

Here are the some of the key details revealed during updates from Microsoft’s Windows 11 launch announcement.

Windows 11 is officially the name of the next version of Microsoft’s desktop (and laptop & tablet) operating system. pic.twitter.com/tp2mx4O349

Windows Teams will be built into Windows 11. pic.twitter.com/urTXoarjzW

Windows Widgets for Windows 11 are a personalized feed that slides out from the side of the display, pic.twitter.com/ei5NB9wpZL

Windows 11 for tablets has larger touch targets when keyboard is detached, more space between taskbar icons, updated snap support (side-by-side windows stack on top of one another in portrait mode), and there’s support for gestures, haptic feedback for pens, new keyboard styles. pic.twitter.com/PykBs02pZK

Updates to window snapping in Windows 11 include support for more layouts (three columns, etc) and multi-monitor support. Detach your external monitor and open windows will be saved as a Snap Group. Reconnect and those windows will be restored automatically. pic.twitter.com/5nogydFZ0K

Windows 11 picks up some Xbox-style gaming features including support for Auto HDR in games, and DirectStorage for reduced CPU usage and faster data access. pic.twitter.com/IGKvslz7oj

Microsoft says it wants developers to bring Win32, Progressive Web App, or Universal Windows Platform apps to the Windows Store. And while there’s a MS commerce engine, in a shot at Apple, Microsoft notes devs can use the own payment systems and keep 100% of earnings pic.twitter.com/HFYytYGfm6

The new Microsoft Store also a “pop-up” store experience that will appear when you click a link on the web to install an app that’s available from the Microsoft Store.

Android apps will run natively on Windows 11, allowing you to launch them from Start, view them side-by-side with Windows apps, and find them from the Windows Store (via a partnership with the Amazon Appstore). pic.twitter.com/jwTcdiGMh1

Windows 11 will be available to the general public later this year, but preview builds will begin rolling out to members of the Windows Insider Preview program this summer.

Microsoft notes that rather than rolling out two major updates a year the way it has for Windows 10 in recent years, the company is moving to an annual release schedule, and each build will be supported for 24 months (for Home and Pro editions) or 36 months (for Enterprise and Education editions), which could help individuals or businesses that may not be comfortable installing updates right away.