Apple is kicking off its annual Worldwide Developer Conference with a keynote where the company is revealing updates coming to iOS, iPadOS, and macOS.

Among other things, the company is bringing Zoom-like features to its FaceTime service, including a new grid view and support for generating meeting invitation links that you can send to anyone — including Windows and Android users. Clicking the link will let users join a call via a web browser.

But that’s just the tip of the iceberg. Apple is introducing a nifty new Universal Control feature that lets you use a single mouse, touchpad, or trackpad to control multiple Mac or iOS devices, new features for iPad widgets, and improvements for notifications, privacy, health, photos, and many other apps and features.

Developer betas of iOS 15, iPadOS 15, and MacOS Monterey are out today, with public betas coming in July and stable versions set to roll out for end users this fall. 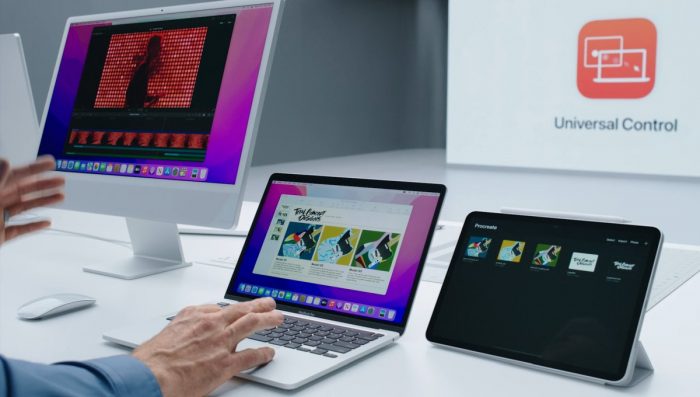 One of Apple’s strengths has always been its ecosystem. The company’s software is designed to let all of its hardware work better together. And the new Universal Control capabilities built into the next version of MacOS, called “Monterey,” is a pretty great example.

Place your iPad next to your Mac and you can use the computer’s keyboard and touchpad to control the iPad. Just move the mouse cursor to the edge of your screen, keep going and it’ll pop up on the iPad. Not only does this allow you to enter text or launch and interact with apps, but you can also copy and paste images or files between devices.

Universal Control also works with up to three – during the keynote we saw a demo of an iMac, MacBook, and iPad all working together. But The Verge notes that it needs to be initiated on a Mac, not an iPad.

MacOS Monteray’s Universal Control lets you use a single mouse and keyboard to control multiple devices. Put an iPad next to your Mac and you can drag your mouse cursor from one to the other. It also allows you to drag and drop files, images, etc between multiple devices. pic.twitter.com/fnu0krNqKp

MacOS is also picking up an updated Safari web browser with a new design for tabs and support for a new Tab Groups feature.

Safari for macOS Monteray gets an overhauled design with smaller tabs that take up less space, a location bar built into the tabs themselves, plus support for Tab Groups which lets you organize a set of tabs and open them all at once/switch between. Groups sync across devices. pic.twitter.com/Ds6R9VPcf2
— Liliputing (@liliputingnews) June 7, 2021

Apple is also bringing a new Shortcuts feature to the Mac, allowing users to choose from pre-built actions or create their own custom app-and-action shortcuts.

FaceTime for Mac now supports spatial audio (so voices sound like they’re coming from the position on the screen where each face is located), and AI-assisted voice isolation, which suppresses background noise.

And AirPlay to Mac lets users beam content from a phone or tablet to a Mac as if it were a smart TV or wireless speaker.

AirPlay to Mac allows you to send video, music, or other content from an iPhone to a Mac, turning it into an external display, speaker, etc. pic.twitter.com/DUClHgAN66
— Liliputing (@liliputingnews) June 7, 2021

Apple’s cloud services are getting an update with new privacy features and support for connecting more HomeKit security cameras to your system.

Apple is bringing new multitasking features to iPadOS, including some that had already been available for iPhones (like an App Library for managing installed apps), and some that aren’t (like widgets on the home screen).

Apple brings new multitasking features to iPadOS that makes it easier to switch to split view, slide-over etc. There’s also a new shelf at the bottom of the screen that lets you view different workspaces, sort of like a virtual desktop. pic.twitter.com/d6GwodSW0P
— Liliputing (@liliputingnews) June 7, 2021

Apple brings support for larger widgets to iPad OS, support for mixing widgets and apps on the home screen, and an App Library view that helps you group apps since the larger widgets might move them to later pages otherwise. pic.twitter.com/Jg1DOxXApq

Quick Note is a new way to create a note from any screen by swiping up from the bottom of the display. Notes show up in your Apple Notes, and the app works with iOS and macOS as well as iPadOS. pic.twitter.com/44yBsdW9IV
— Liliputing (@liliputingnews) June 7, 2021 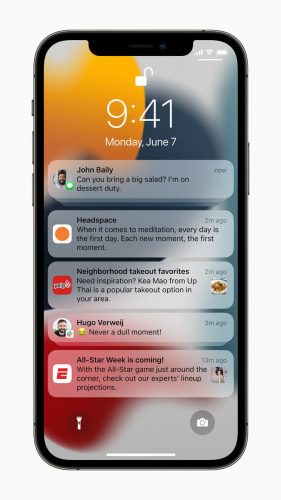 Other updates in iOS 15 include the Focus feature mentioned above in the macOS section and some privacy updates – for example the Siri voice assistant now does language processing on your device without sending any data to the cloud. Not only does this mean Apple isn’t storing your voice data, but it should also allow for faster response times.

Apple says Spotlight in iOS 15 can now search photos by location, people, scenes, or objects. It can even find handwriting in a photo thanks to a new Live Text feature which can convert text in a photo into searchable, copy/pasteable text.

Apple Maps in iOS 15 picks up Google Earth-like interactive globe, more detailed driving mode, and improvements for transit users and walking (including 3D augmented reality directions once you use your phone to scan a building and figure out your real-time location). pic.twitter.com/jgz8um4LyG

FaceTime SharePlay also lets you sync video, music, and other apps across multiple users, letting you watch or listen together from different places. Select third-party apps also supported. Screen Sharing is too. pic.twitter.com/3D6h3VHe8Q

Apple’s new privacy features include Mail Privacy protection that hides your IP address from senders, prevents them from seeing if you’ve opened an email. A new App Privacy report lets you see which apps are requesting access to hardware & data. pic.twitter.com/wctVNKDk5H