Huawei is expanding the reach of its HarmonyOS software with the launch of three new tablets powered by the operating system. The Huawei MatePad 11, MatePad Pro (10.8 inch), and MatePad Pro (12.6 inch) will be available in China and Europe in the coming weeks.

While there’s plenty of evidence that HarmonyOS is really just a fork of Android, it includes Huawei’s custom user interface and app store rather than Google’s apps and services, and represents the company’s efforts to break its reliance on US-based technology following trade restrictions imposed by the US government.

That said, two of the company’s new tablets feature processors from Qualcomm, a chip maker located in the United States because, possibly because some of those restrictions have affected Huawei’s own chip-making capacity.

It sports a Huawei Kirin 9000E processor, making it the only model among Huawei’s new tablets to feature a Huawei-made system-on-a-chip. Other features include 8GB of RAM, up to 256GB of storage, a 10,000 mAh battery, a 40W fast charger (wired) and support for 27W wireless charging.

One unusual feature that helps set this tablet apart? Not only does it have four microphones with support for far-field voice detection, but it also has eight speakers with Harman Kardon tuning.

Optional accessories include a keyboard cover and digital pen.

The MatePad Pro 10.8 inch tablet is a smaller, more affordable model which also launches June 10th in China, but it will have a starting price of 3,799 CNY (about $595) and it differs in a few key ways.

First, it has a Qualcomm Snapdragon 870 processor rather than a Kirn chip. Second, it has a 120 Hz display, but it’s an IPS LCD screen rather than OLED. The battery has a capacity is also lower, and 7,250 mAh.

Most other specs are largely the same as for the larger model.

It’s powered by a Qualcomm Snapdragon 865+ processor and features support for up to 6GB of RAM, up to 128GB of storage plus a microSD card reader for removable storage. The tablet has a single 13MP rear camera and an 8MP front-facing camera, a USB-C port, 22.5W charging support, and a 7,250 mAh battery.

Thee MatePad 11 has four speakers, which is two more than you’ll find on most mobile devices. But it’s still have as many as you get from the Pro models.

Huawei will also sell optional keyboard and pen accessories for this model.

One advantage to moving from Android to HarmonyOS is that it gives Huawei more control over the behavior of its tablet software. Even if the new operating system is just a fork of Android, Huawei is no longer bound by Google’s compatibility requirements. It’s unclear to what degree Huawei is taking advantage of that freedom, but the company does highlight some interesting features of its software on the product pages for its new tablet including:

Huawei also plans to roll out a software update that will replace Android with HarmonyOS on 100 existing Huawei devices including many recent smartphones and tablets. The updates will begin rolling out to some devices this week, and the transition should be completed by the first half of 2022. 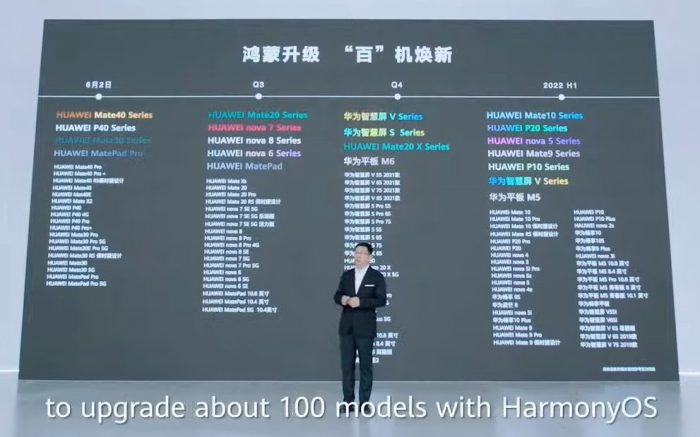 via Huawei (YouTube), The Verge, xda-developers, GSM Arena, and NotebookCheck (1)(2)