System76 has been selling Linux computers for more than 15 years. For a long time that meant the company’s hardware came with Ubuntu pre-installed. But a few years ago System76 began offering users a choice of Ubuntu or the company’s own Ubuntu fork called Pop!_OS.

Now System76 is taking things a step further and releasing a new desktop environment for Pop!_OS called COSMIC. First unveiled earlier this year, COSMIC is now the default user interface for the latest version of the operating system, Pop!_OS 21.04, which was released this week. 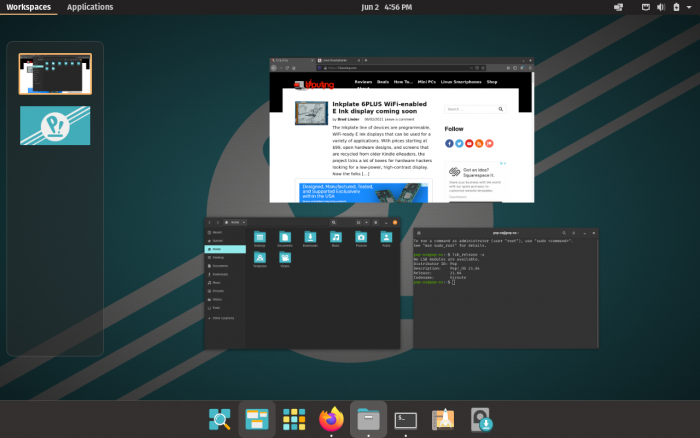 As the name suggests, Pop!_OS 21.04 is based on Ubuntu 21.04 and most software that runs on one operating system should work on the other. But the System76-made operating system has a different look and feel and a lot of customization options thanks to the COSMIC desktop environment.

There’s also a launcher utility that opens when you hit the Super key, allowing you to launch applications by typing their names, open specific menus in the Settings app, search websites, make mathematical calculations, and perform other actions.

Just about everything System76 has added is customizable. Don’t like the look of the dock? You can move it to the left or right side of the screen, adjust its sizes, hide it, or choose not to use it at all.

Don’t want Workspaces and Applications buttons? You can remove one or both. You can also move the date, time and notifications from the right side of the screen to the left.

And you can choose whether to display minimize or maximize buttons for applications, use window tiling to arrange applications on your display, and add third-party plugins for the COSMIC launcher or develop your own.

While Pop!_OS is developed by System76 and it’s one of the two options users can select when configuring a System76 laptop or desktop computer, the operating system is available as a free download for anyone who wants to try it on their own computer with an x86 processor.

You can also find documentation at the System76 website, and the source code for Pop!_OS is available at GitHub.

One reply on “COSMIC desktop environment makes its debut with release of Pop!_OS 21.04 Linux distribution”