HP is expanding its gaming laptop with new Omen 16 and Omen 17 premium notebooks as well as a new lower-cost laptop, the Victus by HP 16.

All of the new laptops feature discrete graphics and HP will offer models with a choice of Intel Tiger Lake-H or AMD Ryzen 5000H series processors.

The first HP Omen gaming laptop with a 16.1 inch display, this gaming notebook is available with up to a 2560 x 1440 pixel display with a 165 Hz screen refresh rate and features support for up to NVIDIA GeForce RTX 3070 graphics.

HP will offer models with up to an Intel Core i7-11800H processor or up to an AMD Ryzen 9 5900HX chip and the notebook features two SODIMM slots for DDR4-3200 memory, two PCIe Gen4 x4 slots for solid state storage, and a selection of ports including:

One other difference between the AMD and Intel models is that the starting weight for Intel configurations is 5.22 pounds with a 70 Wh battery, while the AMD version starts at 5.12 pounds with the same battery capacity.

Other features include a backlit keyboard with options for per-key RGB lighting, 4-zone lighting, or single-zone lighting, and support for up to WiFi 6E and Bluetooth 5.2 wireless connectivity.

HP says it’s also redesigned its cooling system with a new fan that’s thinner than the one used in the previous-gen HP Omen 15 laptop, while still allowing the laptop to run as much as 3.2 degrees Celsius cooler and generate about 3 dBA less noise.

The new HP Omen 16 will be available in June with prices starting at $1050 for configurations with AMD processors or $1150 for Intel-powered models.

HP also opted for a tenkeyless design for the keyboard, which is unusual for a 17 inch laptop, but not all that surprising for a gaming model, I guess.

While this is a big laptop, HP notes that at 27mm, it’s 10.7 percent thinner than the previous-gen, and 15 percent lighter.

This 5.5 pound laptop is the first in a new “mainstream gaming brand” for HP, which is another way of saying cheaper laptops. The HP Victus by HP 16 will be available in June with prices starting at $800 for models with AMD processor or $850 for Intel configurations. 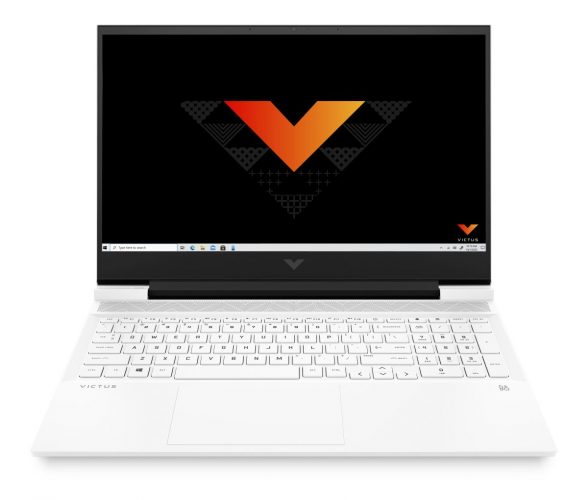 Available with up to a 16 inch, 2560 x 1440 pixel, 165 Hz display and up to an Intel Core i7-11800H or AMD Ryzen 7 5800H processor, this laptop is no slouch in the performance department. But graphics options top out at NVIDIA GeForce RTX 3060 or AMD Radeon RX 5500M, so it won’t quite deliver the same level of gaming or content creation prowess you’d get from one of the company’s pricier Omen-branded machines.

Some entry-level configurations may only have NVIDIA’s GeForce MX350 GPU, which is typically found in thin and light mainstream notebooks rather than gaming PCs. 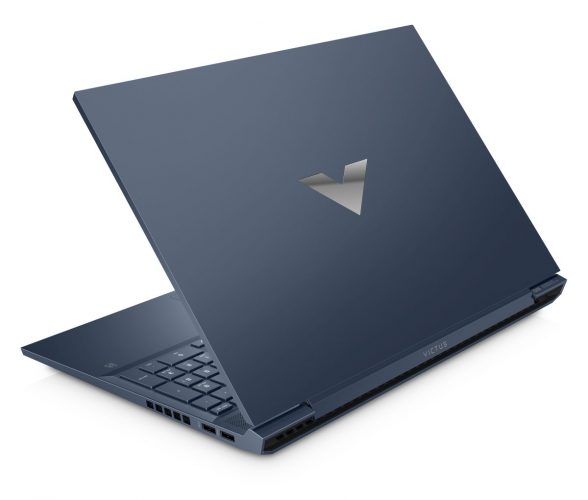 HP will offer configurations with up to 32GB of DDR4-3200 memory and up to 1TB of PCIe Gen 4 storage (there are dual SSD slots with support for RAID 0 storage options and/or Intel Optane memory).

Other features include a backlit keyboard with a number pad, HDMI 2.1, Gigabit Ethernet, and headset jacks plus four USB 3.0 ports (1 x USB Type-C and 3 x USB Type-A, all with 5Gbps speeds).