The ONEXPLAYER is a handheld gaming computer with an 8.4 inch, 2560 x 1600 pixel touchscreen display sandwiched between a pair of game controllers. It looks a bit like a large Nintendo Switch, but the controllers are not detachable and under the hood lies the beating heart of a full-fledged computer.

Powered by an Intel Tiger Lake processor with Intel Iris Xe graphics, the latest little computer from Chinese company One Netbook features 16GB of RAM, up to 2TB of PCIe NVMe storage, and a 59 Wh battery. 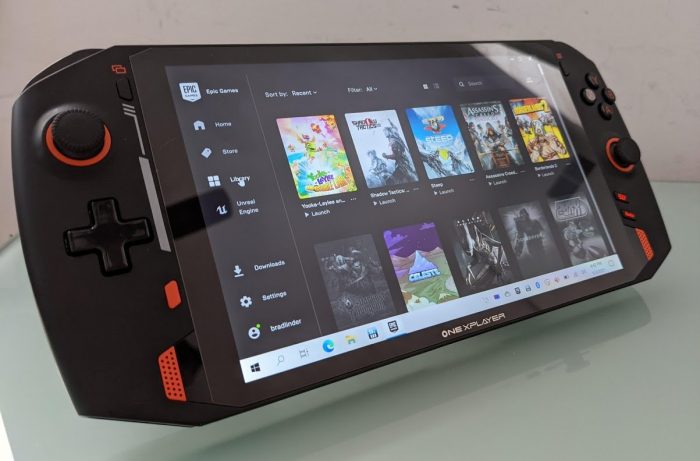 The little computer is set to go up for pre-order through a crowdfunding campaign that starts later this month, but the folks at One Netbook sent me a pre-release prototype to test ahead of the launch of that campaign.

It seems like 2021 may be the year of the handheld gaming PC. While this is a niche category that’s currently occupied by small companies that aren’t very well known in the West, there are a growing number of portable computers designed to let you hold your games in your hands.

When the ONEXPLAYER ships later this year, it will join other systems like the Intel-powered GPD Win 3 (with a 5.5 inch display and a slide-out keyboard) and the AYA Neo (with a 7 inch display and an AMD Ryzen 5 4500U processor, but no keyboard).

With an 8.4 inch display, the ONEXPLAYER is the largest of the bunch. You can pretty much fit the entire GPD Win 3 inside the display area of the ONEXPLAYER.

Weighing about 1.81 pounds and measuring about 11.5″ x 5″ x 0.7″ (or closer to 1.3″ at the thickest point), the ONEXPLAYER is a bit on the chunky side for a device that’s meant to be held in your hands. But its size gives you plenty of screen space for games, videos, or other applications. The controllers are also large and comfortable to use with buttons, analog sticks, and a D-Pad that are all about the same size as what you’d find on an Xbox or PlayStation controller.

Trying to decide just how big that is? Here’s another point of comparison: The ONEXPLAYER’s 8.4 inch display is a little larger than the display of an Amazon Fire HD 8 tablet, while the ONEXPLAYER’s body is a little larger than a Fire HD 10 (or several of them stacked on top of each other). Since I happen to have one of each, I offer a size comparison.

While the ONEXPLAYER is certainly on the heavy side for a handheld device, it’s not something you’re likely to hold in one hand the way you would a phone or a tablet. It’s meant for a two-handed grip and as often as not, I end up resting the bottom on my lap or on a table when playing games, so the weight isn’t really much of a problem.

In a nutshell, this is a portable device in that it’s a battery powered gaming PC that you can take anywhere. But it’s not going to fit in your pants pocket.

There’s also a kickstand that you can use to stand up the system on a table, desk, or any other flat surface if you don’t feel like supporting its weight in your hands or if you’re using it to watch videos. 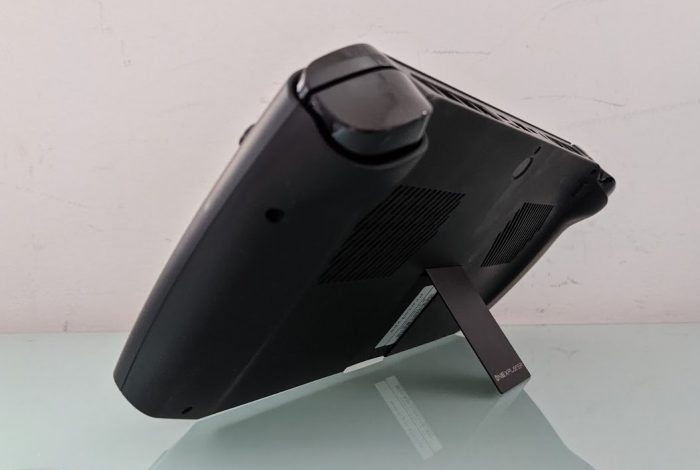 In addition to the front buttons, there are four shoulder buttons including left and right linear trigger inputs. And on the top of the computer you’ll find a series of ports including: 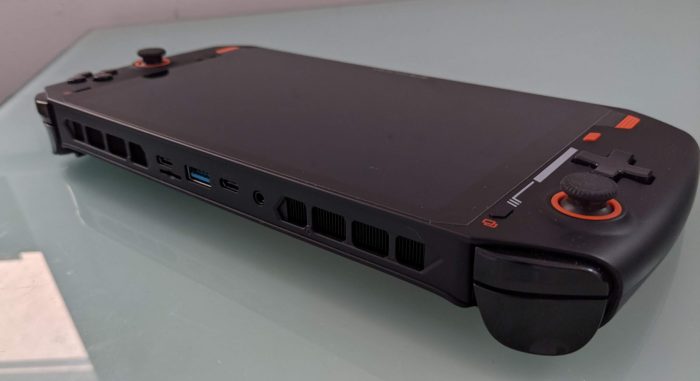 On the back of the computer there’s a power button with a built-in fingerprint sensor as well as a  mute key on the left side and volume up and down keys on the right. 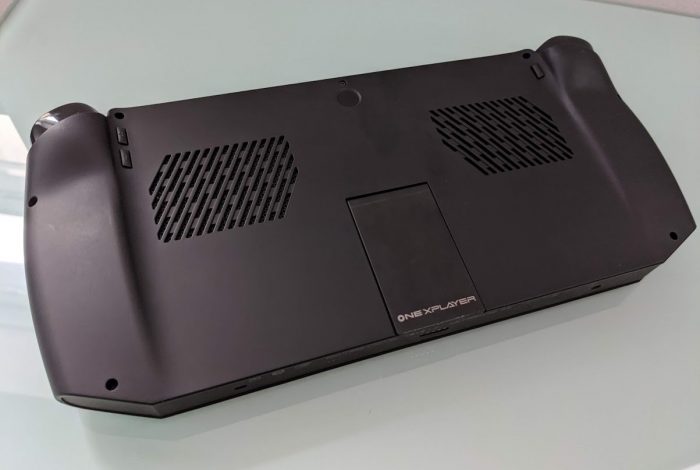 You may also notice the air intake vents on the back of the computer. Not only does the ONEXPLAYER feature a laptop-class 11th-gen Intel Core processor, but the chip has been configured to run at two different power levels: 20 watts or 28 watts. This means that even at the lower setting, you’re getting a bit more performance than you’ll see from most laptops with the same processor options. And performance kicks up a notch if you switch to the 28 watt TDP option.

But the computer generates a fair amount of heat, so it has an active cooling system that consists of dual fans which bring in air through the back of the ONEXPLAYER and blow it out through vents in the top of the machine. The design allows for decent airflow without your hands getting in the way of the intake or the exhaust. There are also two copper heat pipes over the CPU to help dissipate heat. 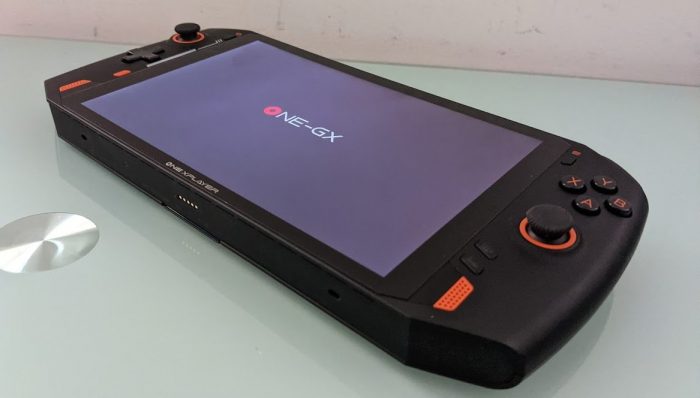 On the bottom of the computer there’s a set of pogo pins that can be used to attach an optional keyboard. One Netbook did not send me a keyboard for testing, but it’s easy to use any USB or Bluetooth keyboard with the device thanks to the included ports and wireless capabilities. And honestly, the ONEXPLAYER is pretty easy to use for its intended purpose even without a keyboard. 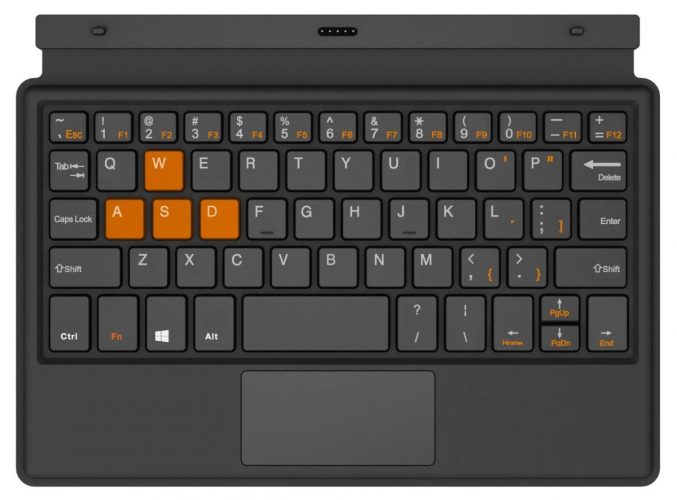 That’s because in addition to the game controllers, One Netbook equipped the handheld computer with a few extra buttons that help you perform basic functions without a keyboard.

Need to bring up an on-screen keyboard? There are two buttons in the lower right corner. Click the top one and it will open the Windows virtual keyboard from any application.

You can also long-press the keyboard button to enable mouse mode. This allows you to use the left analog stick to move a cursor across the screen, the A button to click, and the B button to right-click. I’ve found that this can come in handy for performing simple tasks if you don’t want to use the touchscreen or connect an external input device.

Below the keyboard button is a Turbo button. A single press switches the computer from a 20W TDP to a 28W TDP for an extra burst of power when you need it, which can come in handy for some games that may struggle at lower power levels. 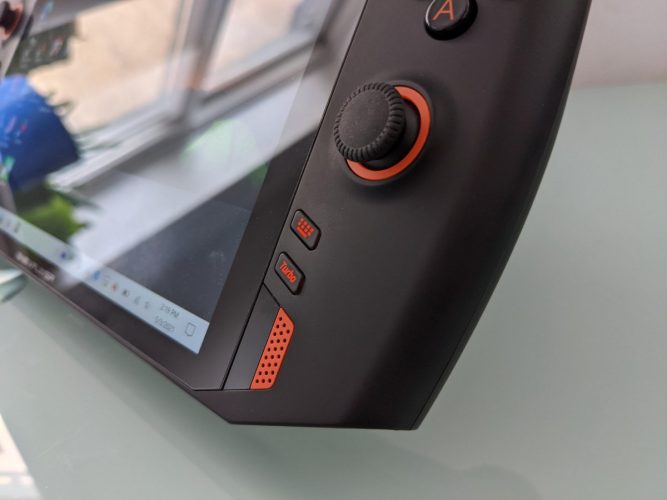 One Netbook included LED indicator lights for both the keyboard and turbo buttons so you can tell at a glance when they’re active. This lets you save power when you don’t need turbo mode (it’s more energy hungry), and helps ensure that the game controllers work like… game controllers when you want them to (enabling mouse mode tricks the operating system into thinking you’ve unplugged the controllers and connected a mouse instead).

Some of the keys serve multiple functions when you combine keypresses.

If you press and hold the Desktop + Volume up key during startup, you can also access a boot settings menu that allows you to boot from a USB device or enter the BIOS/UEFI settings. 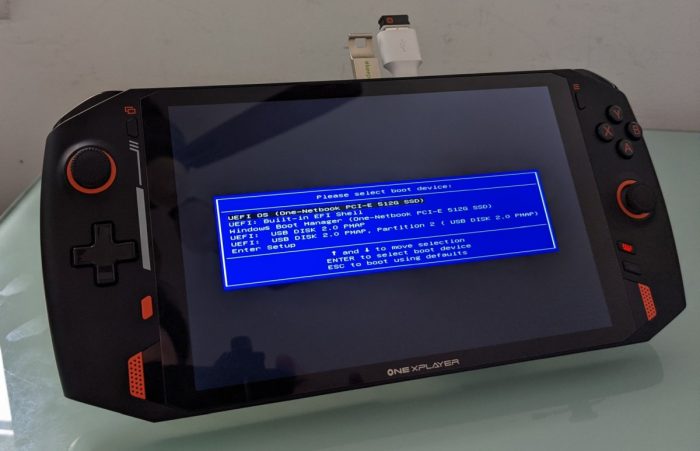 From there you can use the D-Pad to navigate your options (like booting from a USB device or entering the UEFI/BIOS settings), and the Start button as an OK/select key.

I’ll have more notes on usability, gaming and general purpose performance, battery life, and Linux usage in my full review. For now, here’s the latest list of specs for the ONEXPLAYER:

Here’s a breakdown of some pricing/configuration options that will be available for pre-order during crowdfunding:

There may also be some other configurations available in the future, as One Netbook notes that the Pro and Ultimate Edition models will each be available with up to 2TB of storage. 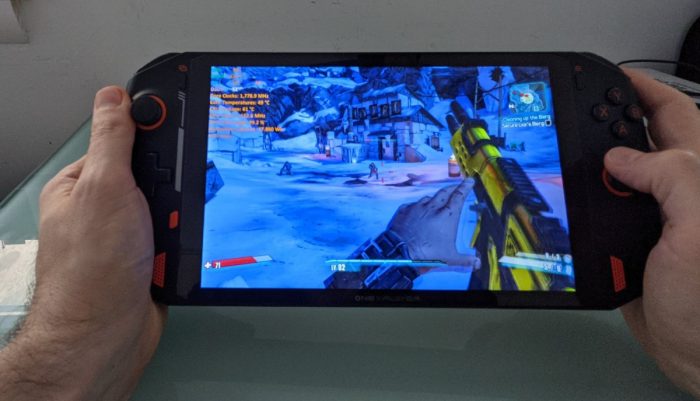 The pre-release prototype One Netbook loaned me is an entry-level ONEXPLAYER Pro Edition with 512GB of storage. Unfortunately I’ve run into one problem during my testing so far – shortly after filming the unboxing and first look video you can find near the top of this article, the touchscreen stopped responding to touch.

One Netbook sent me touchscreen drivers, but that didn’t fix the issue. Neither did performing a system restore, so I’m thinking there might be a hardware problem with the device I’m testing. But there are two reasons I’m not too concerned about the touchscreen failing. 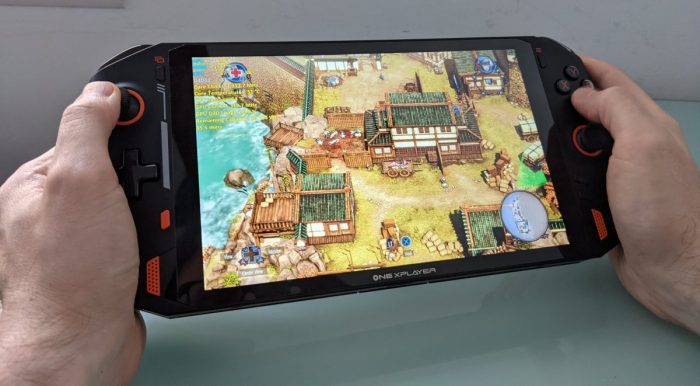 The first is that this is pre-release hardware. When I’m done testing it, I’ll return it to One Netbook to inspect so that they can try to figure out what went wrong and hopefully this won’t be an issue on the final version of hardware that ships to customers later this year.

The second reason is that, as I mentioned above, it’s actually quiet easy to use the ONEXPLAYER for its intended purpose without a touchscreen. Entering text using the on-screen keyboard and mouse mode can be a little tedious. But if you just need to do a quick internet search or enter a username or password, it’s fine. And mouse mode is more than sufficient for installing apps and games, dragging and dropping files, and generally navigating Windows or other operating systems.

Even if this thing never had a touchscreen in the first place, it’d be a pretty good gaming computer. But hopefully One Netbook will fix whatever issue caused the touchscreen on this unit to stop working. I’m told other demo units have not had this problem.

The ONEXPLAYER is up for pre-order through an Indiegogo crowdfunding campaign.