ARM-based processors power almost all of the world’s smartphones as well as many tablets, some computers (including most recent Apple Mac products), and a huge number of other gadgets.

Most ARM chips released in the past ten years have been based on ARMv8 architecture. But earlier this year ARM announced it would soon make the move to ARMv9. And now the company is introducing its first CPU designs based on the new architecture, which ARM says will bring improvements in performance and efficiency.

ARM is also unveiling a set of new GPU designs to go along with the new CPUs. 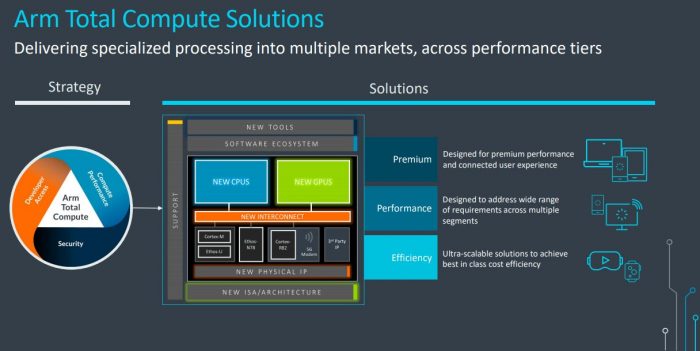 Keep in mind that ARM doesn’t actually make chips – the company licenses its designs to other companies. But the newest designs will likely be incorporated into upcoming processors from companies like Qualcomm, Samsung, and MediaTek, or possibly adapted to create custom versions. 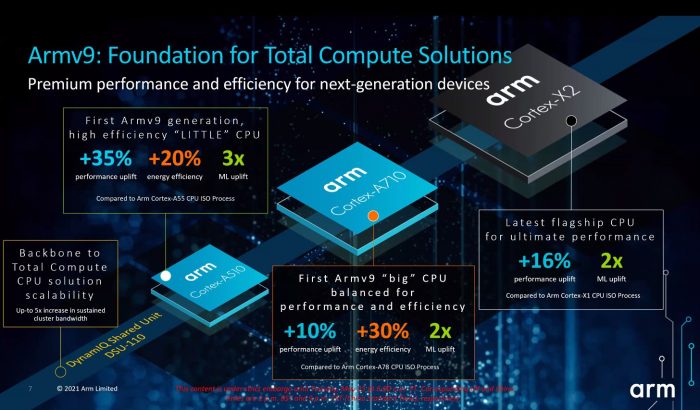 The new Cortex-X2 is an update to last year’s Cortex-X1, and ARM is promising up to a 16-percent boost in overall performance, and up to twice the performance when it comes to machine learning/artificial intelligence.

Cortex-A710, meanwhile, is an update to the previous-gen Cortex-A78, and represents a number change to go along with the new architecture. Expect another 2X machine learning performance boost, a 10-percent jump in overall performance, and a 30-percent improvement in efficiency from this core.

The third new CPU design is Cortex-A510, which is an update to the previous-gen Cortex-A55, and this time we’re seeing bigger performance gains. Expect a 35-percent boost in CPU performance, 3 times the machine learning performance, and 20-percent efficiency gains.

While some chip makers opt for just one type of CPU core, many chips bundle two or more types of cores together in big.LITTLE designs. The Cortex-A710 cores are what ARM considers “big” cores, while the Cortex-A510 is a “LITTLE” core, but the company says it offers the kind of performance you would have expected from “big” cores a few years ago.

So while some of the performance gains listed above look relatively modest, when you combine them into a single chip you could see significant improvements in power and efficiency — especially for tasks that can leverage the machine learning capabilities for tasks like image recognition.

ARM says the new Mali-G710 GPU is its most powerful GPU to date for smartphones and Chromebooks, offering 20-percent gains in both performance and efficiency, plus a 35-percent boost in machine learning performance. 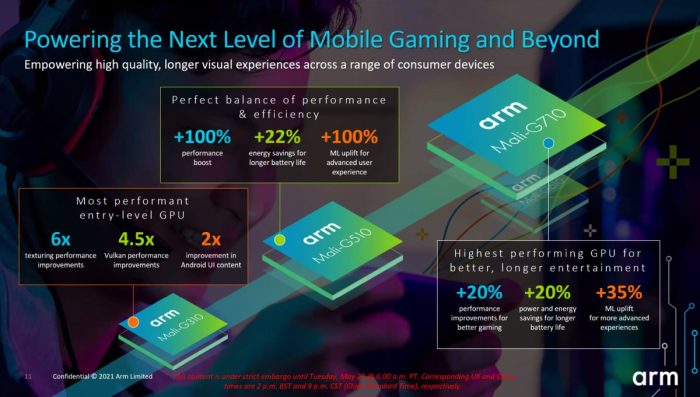 But the company is also adding a new “sub-premium” model called the Mali-G610 which has the same feature set as the Mali-G710, but a lower price tag, allowing it to be used in more affordable devices.

As with the new CPU designs though, the bigger performance gains come in when you move down the product line. ARM is promising a 2X graphics performance boost with the Mali-F510 processor, which also seems 2X the machine learning performance and 22-percent saving in energy efficiency.

The Mali-G310 GPU, meanwhile, brings ARM’s Valhall architecture to chips for entry-level smartphones and other devices. ARM says it brings up to 4.5X the performance with Vulkan graphics, a 2X improvement in Android user interface content rendering, and other improvements.