Dynabook’s first Chromebook is an 11.6 inch convertible model designed for the education market. Announced late last year in Japan, the Dynabook Chromebook C1 is also one of the first Chromebooks powered by a Qualcomm Snapdragon 7c processor and featuring 4G LTE support.

It’s unclear if or when this model will make its way to other countries, but Dynabook does have global and US divisions that it uses to sell other computers worldwide. 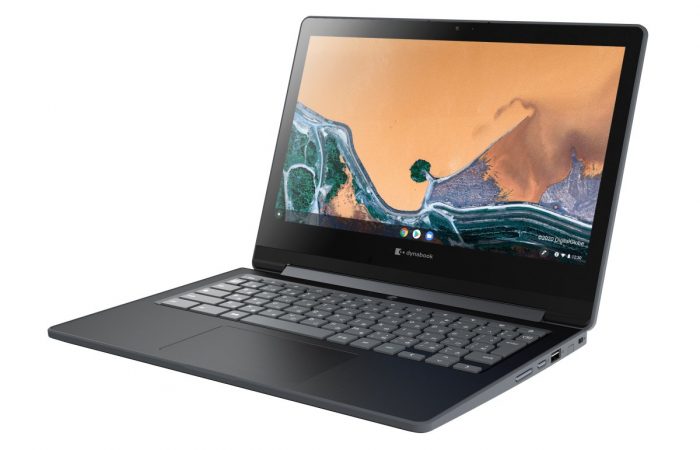 Dynabook is basically the evolution of what used to be Toshiba’s personal computer business. Toshiba used to sell a line of PCs under the Dynabook brand, so after Toshiba sold its computer division to Sharp a few years ago, Sharp relaunched the brand as a new company called Dynabook.

Since then, Dynabook has released a number of new laptops, but until recently the company had been focused primarily on Windows models. The Dynabook Chromebook C1 breaks that mold.

It’s a 3 pound convertible laptop with a 1366 x 768 pixel touchscreen display and a 360 degree hinge that allows the system to work in laptop, tablet, tent, or stand mode.

There’s also support for a digital pen with 4096 levels of pressure sensitivity. And when you’re not using the pen you can slide it into a “garage” in the body of the laptop for safe keeping – and for charging. Dynabook says you inserting the pen to charge for 15 seconds will give it enough juice for 45 minutes of usage.

The laptop measures 11.3″ x 8.1″ x 0.8″ and features a semi-rugged design with a spill-resistant body that’s been MIL-STD-810G tested for durability. Ports include USB 3.1 Gen 1 Type-A and Type-C, a microSD card reader, a headset jack, and a nano SIM card reader. Under the hood it has 4GB of LPDDR4X memory and 32GB of RAM. And the laptop has a 1MP webcam.