The Sega Astro City Mini is an arcade cabinet that comes with 37 classic Sega games pre-installed. Oh, and unlike most game cabinets, it’s small enough to hold in one hand.

First released in Japan last summer, the Astro City Mini is coming to the US this week… sort of.

Limited Run Games has announced it’ll take pre-orders starting Friday morning at 10:00AM Eastern Time. But there’s a good chance it’ll sell out quickly, because only 3,500 units have been manufactured with English packaging for the US market so far. 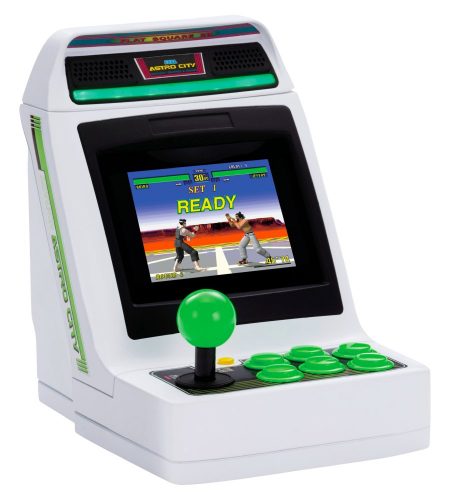 The Astro City Mini has an LCD display, joystick, and six buttons, allowing you to use it as a standalone retro gaming console. But you can also hook up external displays, speakers, and controllers thanks to an HDMI port, headphone jack, and two USB Type-A ports.

One thing to keep in mind is that while the packaging is in English, not all of the games have been translated. Some are only available with Japanese menus and other text, while some games are only partially translated.

You can find the complete list of included games (and their translation status) at the store page.

Limited Run Games says the Astro City Mini will sell for $130, and there will also be optional accessories available including a $28 USB game controller and a $40 “style kit” that makes the mini look more like a traditional arcade console by giving it a base, top board, and even a tiny chair.