When the PinePhone began shipping to early adopters, it had all the hardware you’d expect from a smartphone, but it lacked the software needed to make some of that hardware work. If you were one of the first people to get your hands on a PinePhone, you had a Linux-friendly phone with a camera that couldn’t be used to take pictures or record video.

But over time kernel and app developers got the phone’s front and rear cameras working, and now most Linux distributions for the PinePhone allow you to take pictures (of mediocre quality).

One thing you couldn’t do until recently though? Video calls. But now it looks like that’s possible too… soft of. The process looks rather painful at the moment, but it should get better over time. 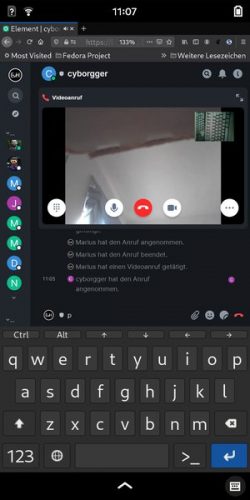 A German developer and Fedora user found a way to make video calls using the open source, decentralized Matrix protocol. But it’s a rather complicated process that requires:

While this makes it possible to make a video call on a PinePhone, you’ll need to be communicating with someone else using a Matrix client, and they’ll need a lot of patience while you fiddle with pretty lousy video.

Video calls on the #PinePhone! You can now hold a video conference call using Matrix @element_hq in Firefox.

The developer notes that when you first start a video, it will use the phone’s rear camera and you’ll have to manually switch to the front camera. But the bigger problem is that video is incredibly slow and choppy, likely because there’s no support for hardware acceleration yet and the phone’s processor isn’t nearly fast enough to keep up with the demands of video streaming using software alone.

Things could get better in the future if developers enable hardware accelerated video support for the PinePhone camera. And it’s possible that the whole install-a-Matrix-client-on-your-own-server thing might not be required in the future either.

There are already a handful of Matrix clients including NeoChat, Fractal, Nheko that can run as native applications on the PinePhone, no web browser required. But so far none of those applications support voice or video calling on the PinePhone. Until then, Element in the browser may be the next best thing.

You can find more details at marius.bloggt-in-braunschweig.de.