Amazon’s Fire TV Stick 4K is an affordable media streamer capable of handling 4K HDR video playback from a variety of sources. But it’s starting to get a little long in the tooth – released in 2018, the Fire TV Stick is one of the oldest devices in the current Amazon Fire TV line of devices.

If you just want the new remote,  you can buy one for $30 and use it with most recent Fire TV devices, but it’s probably not worth upgrading unless you lose or break your old remote. 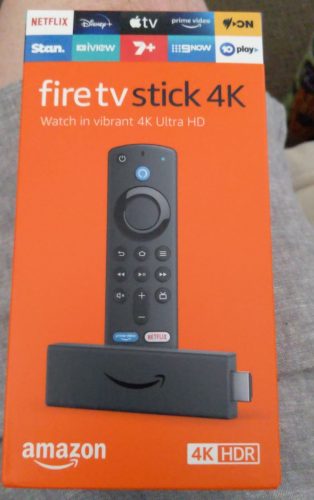 A member of the Australian Whirlpool forum recently posted an image of what’s allegedly a new Amazon Fire TV Stick 4K that will be available in Australia (if it’s real, it’s likely to show up in other countries as well, but presumably in a different package that doesn’t highlight Australian channels).

Previously, the only Amazon Fire TV Stick sold in Australia is the Lite model, so in addition to the new remote, the leak points to Amazon bringing its 4K model to at least one new market. There’s no word on if or when it will be available in Australia or other countries though.

While the Fire TV Stick 4K itself looks identical to the current model, the package shows what appears to be a new remote control that has more in common with Amazon Fire TV Edition smart TVs than with any current-gen Fire TV Stick, Cube, or Recast device.

The Alexa button is now blue, making it stand out a bit more. There are dedicated buttons for Amazon Prime Video, Netflix, Amazon Music, and Disney+ (the last two are obscured in the image, but the person who posted the image says it was sent by a friend “with access to one,” and that those are the labels on the two hidden buttons).

There’s also a Channels button, which first debuted with last year’s Amazon Fire TV Stick Lite. As explained by AFTVNews, when you click the button it brings up a live channel guide that provides a grid view for live content from any streaming apps or services that you’ve installed. So if you’re using a free app like Pluto or IMDB TV or a paid app like Sling TV or YouTube TV, they’ll show up in the guide.

If you have an Amazon Prime Video Channels subscription to services like HBO, Showtime or Starz that offer on-demand and live content, you’ll see that in the live channels UI as well.

But since the Fire TV Stick 4K does not have a TV tuner, you won’t be able to view live over-the-air broadcasts unless you also have a Fire TV Recast DVR.

We don’t know. While it’s possible that Amazon may have upgraded the processor, memory, or other specs, the single picture we have gives us no indication of that.

The 4K model does have 50-percent more RAM (1.5 GB rather than 1 GHz), but it generally scores lower in CPU and graphics benchmarks than the 1080p models, presumably because it has to deliver content to more pixels.

So one could make the case that it’s time for Amazon to upgrade the hardware so that it’s priciest Fire TV Stick is also its fastest again. But you could also argue that it’s already capable of delivering a semi-premium experience since it’s the company’s cheapest 4K-ready media streamer.

We might not know for sure whether there are any under-the-hood changes to the Fire TV Stick 4K itself until Amazon’s ready to make an official announcement (or until another leak provides more details).

Here’s a comparison of the Fire TV Stick models as of early February, 2021:

via AFTVNews, The Streamable, Whirlpool, and /r/firetvstick