Most of the world’s smartphones are powered by processors based on designs from ARM, as are a growing number of other devices including servers, personal computers, IoT and smart home devices, and automotive systems.

While ARM releases new chip designs regularly, most modern ARM-based processors are based on ARMv8 architecture which was first introduced a decade ago. 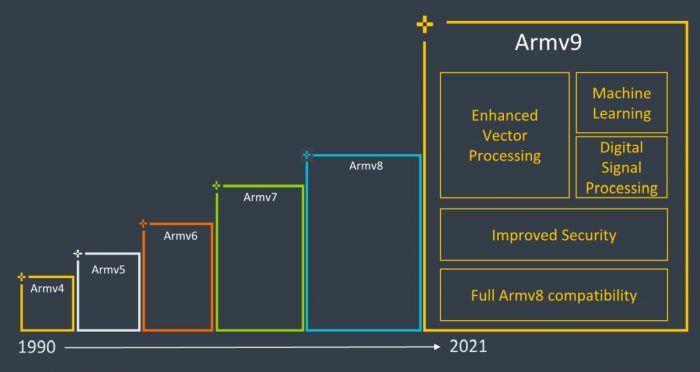 ARM says it expects CPU performance to increase by 30 percent or more over the next two generations of mobile chip designs. But total performance gains may actually be higher if chip makers adopt multi-core designs and use specialized cores for graphics, AI, and other functions.

For security, ARM says it’s introducing ARM Confidential Compute Architecture (CCA) to provide a hardware-based secure environment that allows applications to reside in a protected area of memory where they’re isolated from everything else. Among other things, this means that you could do secure banking without worrying that other apps on your phone would be able to access your financial information. ARM says the data can’t even be accessed by software with escalated privileges.

ARM says the new architecture backward-compatible with ARMv8, building upon the AArch64 instruction set. But the company says the new security and AI extensions should help the company design chips that will meet the needs of the coming decade with the goal of delivering “the next 300 billion ARM-based chips.”

Keep in mind that ARM designs chips, but the company doesn’t make them. The designs are licensed, and sometimes adapted, by companies like Qualcomm, Samsung, MediaTek, NXP, and Apple. We will most likely begin seeing new chips from those companies and others that are based on ARMv9 architecture starting early next year.

ARM also hinted at some other new technologies it’s working on, including next-gen Mali graphics processor designs with support for features including variable rate shading and ray tracing – something that so far has only been available to consumers with the purchase of high-end desktop or laptop GPUs from NVIDIA or AMD. It’s unclear when ARM’s new GPUs. 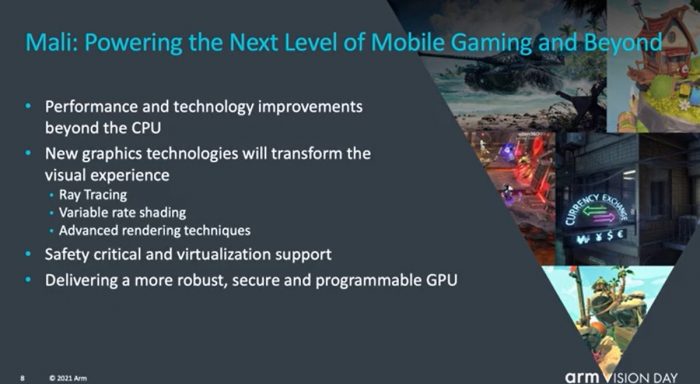