The Nintendo Super Mario Bros Game & Watch is a $50 handheld game console designed to run just three games. But Nintendo’s latest retro console has proven to be hackable… at least by folks with the necessary skills and hardware.

Launched this fall as an homage to Nintendo handhelds from the 80s, the new Game & Watch ships with three Super Mario Bros games pre-installed. But it didn’t take long for stacksmashing to hack the device and get it to run DOOM and other games.

Over the past few weeks several other hackers have gotten in on the action. 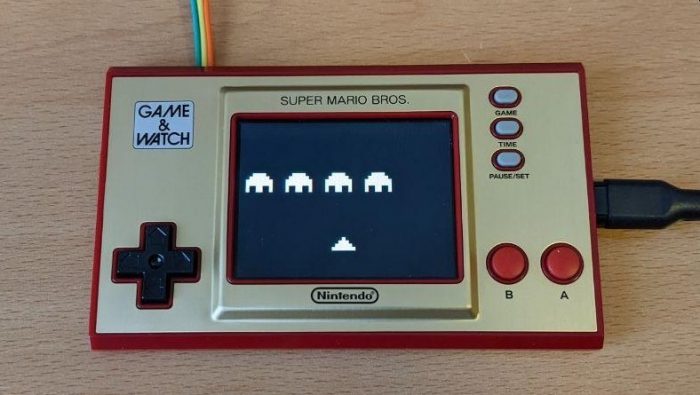 Here are some of the latest things folks have figured out how to do to Nintendo’s Game & Watch.

Now for the bad news – it’s not clear if any of these hacks will be available to casual users anytime soon. Upgrading the storage, for example, requires opening up the Game & Watch, desoldering the flash storage, replacing the module with a larger one, and then using the flash tools to write code to the new storage.

It’s not for the faint of heart.

That said, it’s pretty impressive to see all of the development happening around Nintendo’s newest device which was only supposed to run three games.

With storage upgrade (16MB instead of 1MB) we can now also run large GB ROMs such as US/EU Pokémon 😁 /cc @kbeckmann pic.twitter.com/r4SJWb5f0e

Porting my CHIP-8 emulator to the G&W! pic.twitter.com/j55dVxIEaR

【Game and Watch】 The PCB has now been fully traced by Jake. Amazing effort and this will help us understand how the charging circuit etc works in detail.
Repo: https://t.co/uXXNPvRR4E pic.twitter.com/A5EueQNtlk