Apple plans to transition all of its Macs to Apple silicon chips over the next few years, and the company is kicking things off by equipping its new MacBook Air, MacBook Pro, and Mac Mini with Apple M1 processors.

But while the company says the 5nm, 8-core processor offers a boost in performance-per-watt when it comes to CPU, graphics, machine learning, and even storage speeds, not all applications will be able to take full advantage.

That’s because it’s up to developers to ensure that their existing Mac software is compatible with the new Apple silicon. You’ll still be able to run older apps that haven’t been updated to support the new architecture yet. They might just take a performance hit. 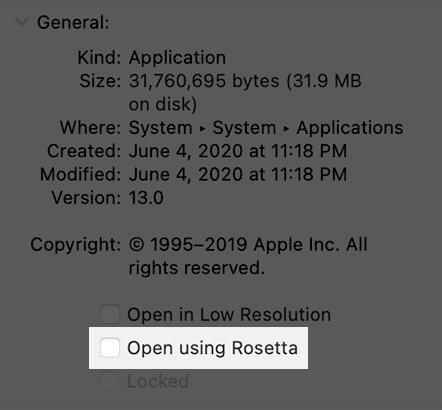 That’s because they’ll need to be “translated” to run on devices with Apple’s new chips. The latest version of macOS includes a new version of the company’s Rosetta Translation Environment, which runs any time a user runs an application that’s designed for Intel chips.

Rosetta will translate the app into something that can run on the ARM64-based M1 processor. But Apple notes that “the translation process takes time, so users might perceive that translated apps launch or run more slowly at times.”

Ultimately Apple is encouraging developers to create “universal binary” versions of their apps with support for both x86_64 and ARM64 architecture. That way users will be able to launch the native version for whatever Mac computer they’re using. But some developers may need more time to port their apps, and other developers may no longer be actively developing the software you want to continue using.

Apple notes that there are some executables that cannot be translated. So kernel extensions are out. And you won’t be able to use a virtual machine on an ARM-based Mac to virtualize an x86_64 environment.

Some newer instruction sets and processor features including AVX, AVX2, and AVX512 vector instructions are also untranslatable. You can find more details at Apple’s developer site.

This isn’t the first time Apple has switched to a new architecture, and it’s not the first time the company has provided a Rosetta translation tool. The first version of Rosetta was released in 2006 when Apple was starting to transition from PowerPC to Intel chips. It continued to function until Apple released OS X 10.7 in 2011, by which time Apple had completed its architecture switch.

It’s unclear how long the new Rosetta 2 will continue to be available, but given that Apple expects it to be at least a few years until all of its Mac computers are running Apple silicon, I’d expect Rosetta to be around for at least that long.