Chip designer ARM is probably best known for the processors that power smartphones and many tablets. But Apple’s next-gen MacBook laptops are expected to be powered by ARM-based chips, and many current-gen Chromebooks (and some Windows tablets) also have processors based on ARM designs.

ARM Cortex-A78C has more cache than other members of the family, and supports up to 8 “big” CPU cores on a single chip, which should offer better multi-threaded performance than a smartphone-class Cortex-A78 chip, which would top out at 4 “big” cores and 4 “LITTLE” cores based on Cortex-A55 architecture.

According to ARM that, combined with 8MB of L3 cache memory and other improvements should lead to better performance for gaming or workloads that involve large datasets.

It’s likely that the new CPUs will be a little more power-hungry than their cousins that use a big.LITTLE design. But ARM-powered laptops already tend to get pretty long battery life, so I suspect PC makers (and customers) would be willing to sacrifice a little run time for a significant enough boost in performance.

ARM doesn’t actually manufacturer and sell its own processors, so it’ll be up to third-party companies to license the new designs and use them in upcoming laptops or other mobile devices. 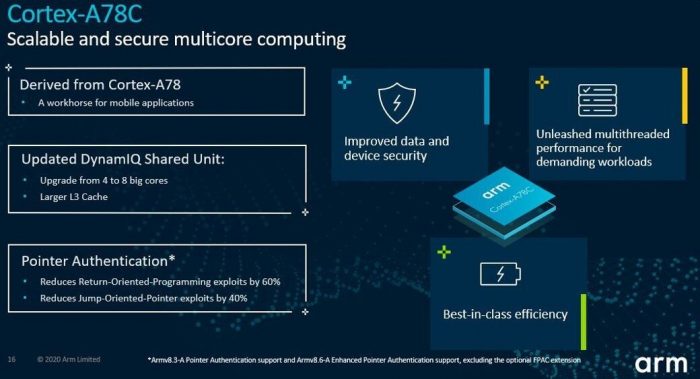