When the first Raspberry Pi computer launched in 2012, there was nothing quite like it on the market: a $35 single-board computer designed for education, home use, or development projects.

These days cheap mini PCs and development kits are plentiful. But I was still surprised to see the Iconikal Rockchip 3328 single-board computer selling for just $10.

This little PC may not be quite as powerful as a current-gen Raspberry Pi 4 computer, but it’s powered by a chip that outperforms the previous-gen Raspberry Pi 3 in most benchmarks. And unlike most Raspberry Pi devices, the starting price for the Iconikal computer includes accessories including a power supply and microSD card.

Update: The Iconikal single board computer seems to be going in and out of stock at Amazon. So if you’re seeing a “currently unavailable” message, you might want to check back at a later time. The price is also fluctuating – I’ve seen it listed for as little as $8 and as much as $15.

The computer also comes with a small 16 x 2 character serial LCD display, and the computer itself features:

The system comes with a 16GB microSD card, but it supports cards up to 256GB. There’s a 5V/3A power adapter that plugs into a dedicated power jack (rather than a USB port), and measuring 85mm x 56mm (about 3.4″ x 2.2″), the Iconikal single-board computer is about the same size as a Raspberry Pi Model B device.

One things this little PC doesn’t have? Built-in support for wireless connectivity. If you want to use WiFi or Bluetooth, your best bet is probably to add a USB adapter.

According to Amazon reviewers, while the computer is sold under the Iconikal brand, it’s actually a product from Network Security company Recon Sentinal. But based on the pictures in the Amazon listing, this may actually be a ROCK64 single-board computer sold under a different name (and at a lower price).

Several of the pictures on the Amazon product page show the ROCK64 name on the front and back of the printed circuit board. And one image is identical to the one Pine64 uses to show the size of the ROCK64 when placed next to a credit card. 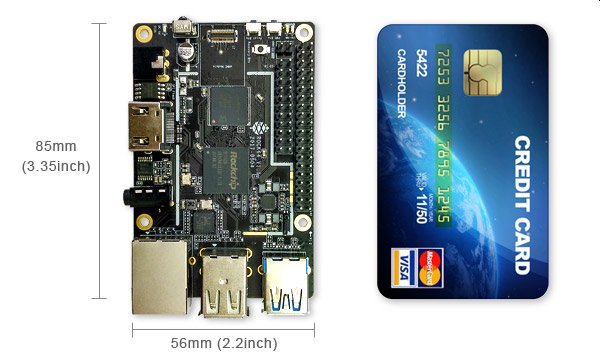 The good news is that this means software that works with the ROCK64 will most likely work on the Iconikal/Recon Sentinal computer, including builds of the Armbian, Debian, LibreElec, SlackWare, and Android operating systems.