Intel’s new 11th-gen Core “Tiger Lake” processors for laptops and low-power desktops are grabbing a lot of attention thanks to a big graphics boost and a more modest bump in CPU performance. But this year Intel is also giving its low-cost, low-power “Atom” chips a major update.

A bunch of new chips with “Tremont” CPU cores are on the way. The first to ship were Intel’s Lakefield processors, which combines Tremont (Atom) and Sunny Cove (the CPU core used in 10th-gen “Ice Lake” chips). Soon we could see “Jasper Lake” chips which will be Celeron and Pentium processors designed for low-power laptops, tablets, and mini PCs.

But first, there’s Intel “Elkhart Lake,” a new line of Atom, Celeron, and Pentium chips designed for IoT (Internet of Things) and other embedded applications. 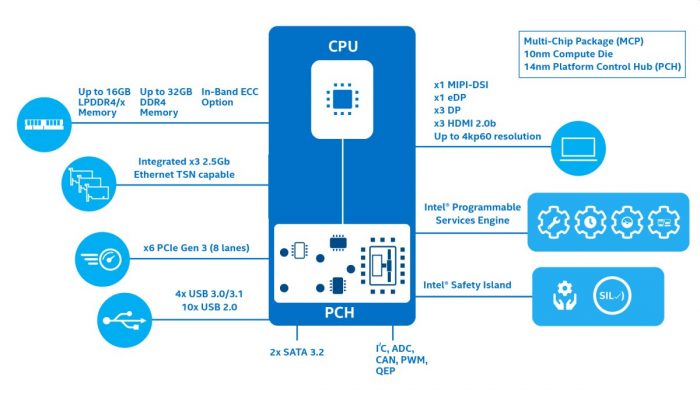 The Elkhart Lake chips are set to hit the streets in early 2021, and at launch there will be 12 chips: eight new Atom processors, two Celeron chips, and two Pentium processors. The new chips have between two and 4 CPU cores and come configured to run at between 4.5 watts and 12 watts, depending on the chip.

These new chips are manufactured using the same 10nm SuperFin process used for Tiger Lake, and they feature the same Intel UHD graphics as Intel’s 10th-gen processors, with support for 4K video playback on up to three displays at once, and up to a 2X improvement in 3D graphics over previous-gen Atom series processors.

Other features include support for up to LPDDR4X-4267 or DDR4-3200 RAM, HDMI 2.0b, eDP, DisplayPort, and MIPI DSI display interfaces, an Intel Programmable Services Engine for offloading IoT functions to an ARM Cortex-M7 microcontroller, and support for Windows, Linux, Android, and RTOS operating systems as well as UEFI, Coreboot, and Intel Slim Bootloader firmware.

Intel is also introducing a new line of 11th-gen Core processors for embedded systems used in healthcare, retail, industrial, or smart city applications. These seem to be embedded versions of existing Tiger Lake chips with an E slapped onto the end of the model number (for example, there’s a Core i7-1185G7E embedded chip that’s very similar to the Core i7-1168G7 processor for consumer devices).