As we already knew from a series of leaks, the two phones share a lot of DNA. They have the same processor, cameras, fingerprint sensors, and storage, among other things. But there are a few key differences.

The Pixel 5 is a slightly smaller phone with a larger battery. It has more RAM than its lower-priced sibling, a higher screen refresh rate, and a water resistance rating. It has a recycled aluminum body rather than polycarbonate. And the Pixel 5 supports both wireless charging and reverse wireless charging.

But in terms of the software experience? That’s largely the same on both phones. And despite the many leaks about hardware and pricing, Google did drop a few surprise announcements about new software features coming to its Pixel smartphones.

For example, the Pixel 5 and Pixel 4a 5G will be the first smartphone to support a new Extreme Battery Saver mode that Google says will let you extend the battery life of your phone by up to 48 hours by selecting only the most important apps that you want to run in this low power mode. 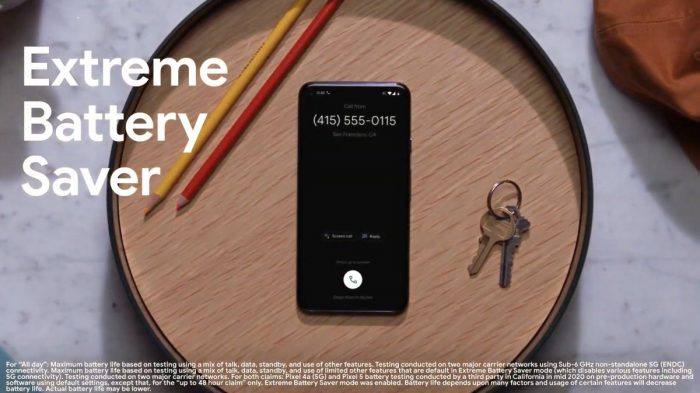 The phones will also be the first to support a new “Hold for me” feature that’s designed to keep you from having to sit on hold indefinitely when waiting to make an appointment, get customer service, or anything else. Assistant can listen for you and send an alert when a person picks up the other end of the line so you know that it’s time to rejoin the call.

Google says both of these new features will make their way to older Pixel devices in an upcoming Pixel Feature Drop, but they’ll be available first on the company’s new phones.

The Pixel 5 and Pixel 4a 5G are also Google’s first phones to feature a dual camera system that pairs the primary camera with a wide-angle camera and they’ll also support new photography features including:

Like all Google Pixel phones, the new Pixel 4a 5G and Pixel 5 will receive 3 years of security and software updates, and customers who buy the new phones will also get free 3 month subscriptions to Stadia Pro, YouTube Premium, Google Play Pass, and Play Points as well as 100GB of Google One storage (which seems like a step down, I seem to recall Google offering 100GB of storage for years at a time in the past).