The new new Gigabyte Brix systems are powered by 28 versions of Intel’s new chips with support for up to Intel Iris Xe graphics, up to 64GB o dual-channel RAM, and multiple storage options.

The little computers should be able to easily drive up to five 4K displays thanks to Gigabyte’s decision to include four HDMI ports as well as a Thunderbolt 4 port.

There will be at least three versions of the new Gigabyte Brix systems with Intel Tiger Lake at launch:

The differences between the three models are basically the processors. Take the last part of the name and you’ll find the Intel Tiger Lake chip version.

All three versions of the computer ship as barebones systems, which means they ship without memory, storage, or an operating system. But all three models two SODIMM slots for DDR4-3200 memory and support for a hard drive and/or SSDs thanks to:

Each model also comes with an Intel AX201 wireless card featuring support for WiFi 6 and Bluetooth 5.1, and each has two Gigabit Ethernet ports on the back.

The four display outputs are HDMI 2.0a ports with support for 4K at 60 frames per second, while the Thunderbolt 4 port should be able to drive another display or work with an external graphics dock or other accessories that require high speed throughput. 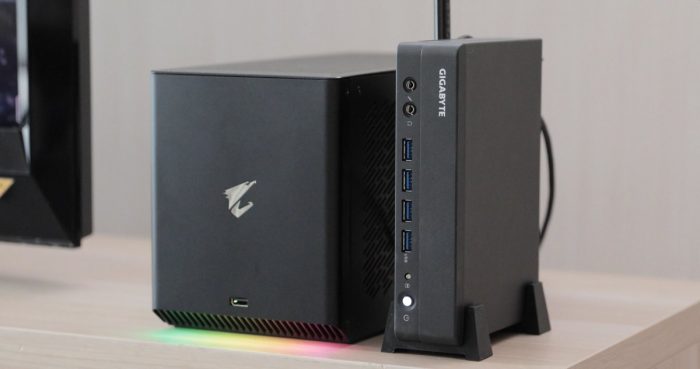 There are also six USB 3.2 Type-A ports and a 3.5mm mic and headphone jacks on the front fo the computer.