Western Digital is updating its line of My Passport portable solid state drives with a new set of small, durable, and speedy SSDs capable of read speeds up to 1,050 MB/s and write speeds up to 1,000 MB/s.

The new WD My Passport SSDs are available for pre-order for $120 and up. 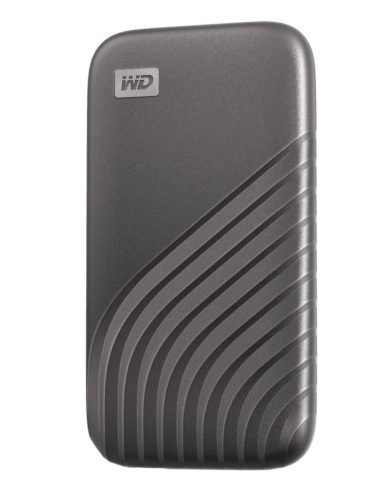 WD plans to offer 500GB, 1TB, and 2TB versions of the new SSD, and the company says they all use NVMe technology, support 256-bit AES hardware encryption, and USB 3.2 Gen-2 connections.

They have a shock and vibration resistant design, and WD says the portable SSDs should be able to withstand a fall from about 2 meters (or 6.5 feet).

Portable USB storage devices have been around for years, but up until recently most devices in this category were hard drives. While portable hard drives are still a great option if you want more storage capacity for less money, SSDs tend to offer higher speeds and better durability since they have no moving parts.

WD’s new portable SSDs are some of the fastest around, offering nearly twice the speed of the SanDisk Extreme portable SSD, for example. That model tops out at 550 MB/s read speeds… but SanDisk isn’t really a competitors, since the company has been a subsidiary of Western Digital since 2016.

Samsung’s T7 Touch portable SSD offers similar 1,050 MB/s read/1,000 MB/s write speeds and also features a built-in fingerprint sensor for security. While that model has a higher retail price, it’s also been around a little longer, which means that it goes on sale from time to time (and you can pick one up for the same price or less than a WD My Passport drive at the moment).

And then there’s Samsung X5 Thunderbolt 3 portable SSD, which costs substantially more, but offers read/write speeds up to 2,800 MB/s and 2,300 MB/s thanks to use of both an NVMe interface and a 40 Gbps Thunderbolt 3 connector.

Overall the new WD drives seem to do a decent job of balancing price and speed. They’re also available in a choice of four colors: blue, red, grey, and gold.